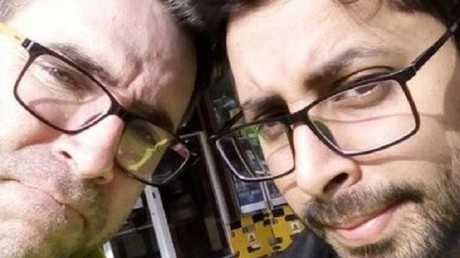 The Metropolitan police has been forced to apologize after two of its officers posted a selfie of themselves at the scene of a murder. Outraged tweeters are now calling for the two “numpties” to be sacked.

The officers in plain clothes posted the image from the Stratford Centre shopping complex in east London, the morning after a man in his early twenties was stabbed to death. The two “will be spoken to,” the force said in a statement.

A spokesman said: “We apologize for any offence caused by the ‘selfie’ picture that was posted from the scene of a serious crime this morning. The officers showed a lack of judgement and sensitivity in posting this and they will be spoken to and reminded of how to use social media responsibly.”

They added that the tweet has now been removed, but the image was soon picked up by other social media users. Angry tweeters branded the officers disrespectful and “crass.” Many called for them to be dismissed over their insensitivity.

Stratford Centre murder: Anger as police officers post selfie from crime scene where young man was knifed to death!
This is the “Professional police” they are always saying? Two numpty’s who should be sacked! Gross ineptitude & lack of respect! That’s the MET for you “CRAP” pic.twitter.com/8SgbF9CaR4

Idiots with no apparent moral compass.

Police apologise after officers post selfie from scene of fatal stabbing, saying it was ‘insensitive’. Hardly a good example of our hard-pressed, over-worked, and under-paid police

Two bloody idiot Met police officers posing for a selfie at a murder scene where a young man was stabbed to death.Not a jot of respect for the dead. Terrifying that this is the calibre of coppers we’re producing these days.

No arrests have been made over the death of the man, who was found outside the complex with stab wounds at around 9:30 pm on Tuesday. He died an hour later.

The Met’s spokesman added: “His next of kin have now been informed. Formal identification awaits and a post mortem examination will be held in due course.

“At this early stage, it is believed that the victim and a friend were involved in an altercation with a group of young males before he was stabbed.”