Activists are protesting the decision not to charge two Minneapolis, Minnesota police officers who shot and killed Thurman Blevins. Authorities said the African-American man was armed and dangerous, but protesters disagree.

Protests interrupted the press conference of Hennepin County Attorney Mike Freeman on Monday, before he could announce that he would not be charging Officers Ryan Kelly and Justin Schmidt.

“These cases tear apart our community. No one wins today: A young man is dead, our officers face increasing criticism and scrutiny, and the community is devastated,” Freeman said.

Blevins’s relatives insist he was not a threat to either the officers or the community.

“He didn’t deserve to die,” his cousin Sydnee Brown told the Minneapolis Star Tribune. “He wasn’t a threat when [the officers] approached him. They didn’t view him as a human being.”

Blevins, 31, was shot and killed on June 23. The Minneapolis Police Department released the body camera video from Kelly and Schmidt, showing them confronting a man with a gun, chasing him when he tried to flee on foot and shooting him once he pulls the gun from his pants.

Freeman’s statement about the facts of the case, released online because the press conference was interrupted, says that in addition to 14 cartridges from the two officers’ handguns, another cartridge was found, showing that Blevins had fired his gun as well.

“Mr. Blevins’s possession of a loaded handgun and his decision to take that gun out of his pocket as he turned towards the officers posed an immediate threat to the safety of the officers and others,” Freeman said, declaring Kelly and Schmidt justified in opening fire.

The two officers were responding to a 911 call about a man shooting in the North Minneapolis neighborhood. The male caller described the man as “light skinned” and carrying a “big bottle of Amsterdam vodka and a cup of green Four Loko alcohol.”

It’s “just not safe around here,” the caller said, according to the transcript of the 911 call, released earlier. 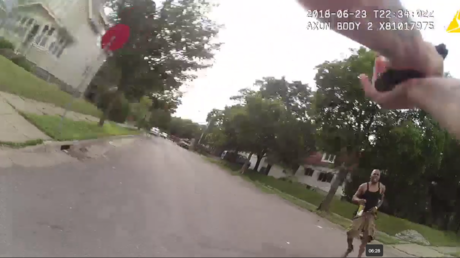 When Kelly and Schmidt pulled up to the location of the call, they found Blevins sitting on the sidewalk next to a woman with a baby. He matched the description of the suspected shooter, down to the alcoholic beverages. Officers said he also had a gun in his pants. When they yelled at him to stop and drop the gun, Blevins took off.

During the chase that took less than a minute, Blevins can be heard yelling at the officers, “I didn’t do nothing bro!” as well as “Please don’t shoot” and “Leave me alone.”

Footage from Kelly and Schmidt’s body cameras, released Sunday night, shows the officers opening fire as Blevins reaches for the gun and points it down and to the side.

The shooting prompted a series of Black Lives Matter protests in the Twin Cities, with activists demanding the police release the body camera footage of the incident as soon as possible.

Attorney Glenda Hatchett told the Star-Tribune on Sunday night she was no longer representing the Blevins family. She famously represented the family of Philando Castile, a St. Paul man shot by a police officer in 2016. While Officer Jeronimo Yanez was acquitted, he was dismissed from the St. Anthony police department and Castile’s family received a $3 million settlement from the city.