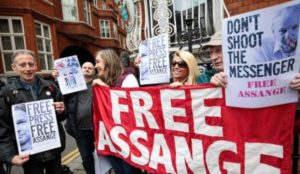 Over 50 years ago, in his letter from the Birmingham Jail, addressing a struggle of the civil right era, Martin Luther King Jr. wrote, “We will have to repent in this generation not merely for the hateful words and actions of the bad people but for the appalling silence of the good people.” His message is now more prevalent than ever in the current political climate surrounding WikiLeaks and its founder Julian Assange.

WikiLeaks stepped onto a global stage with release of a huge trove of classified documents revealing government secrecy. After the publication of war logs that exposed the atrocities committed by U.S. forces in Iraq and Afghanistan, the reaction of the Pentagon quickly escalated into a war against the First Amendment. WikiLeaks was subjected to unlawful financial blockades and there has been an ongoing secret grand jury against the organization and its associates since 2010.

These efforts to destroy WikiLeaks brought a long dreadful persecution of Assange. He has been detained for 8 years, first in prison, then under house arrest and now as a refugee living in the Ecuadorian embassy in London. In 2012 he was granted political asylum against the threat of extradition to the U.S., relating to his publishing activities with WikiLeaks. The UK government, in violation of UN rulings that indicated the situation of Assange as arbitrary detention, kept him in confinement, depriving him of medical care and sunlight.

In late March, this already untenable…