The UK government has refused to stop arms sales to Saudi Arabia, rejecting calls by two parliamentary committees and human rights groups to cease its multibillion-dollar military exports, which critics claim are fueling the war in Yemen.

Noting that the UK defense industry is “hugely successful and an important part of our export portfolio,” the Foreign Office said that the Gulf is a “crucial market for defense exports, in particular Saudi Arabia, to which over 30 percent of all UK arms export licenses in 2015 were approved.”

“As we move towards expanding our military presence and relationships in the Gulf, we would expect defense exports to that region to have a key role to play,” four Cabinet ministers stressed in a joint statement.

“The government is confident in its robust case-by-case assessment and is satisfied that extant licenses for Saudi Arabia are compliant with the UK’s export licensing criteria,” the Foreign Office stated, repeating the epithet “robust” at least six times to make its point.

Saudi Arabia intervened in the Yemen conflict to restore ousted Sunni President Abd-Rabbu Mansour Hadi to power in March 2015. The intervention has claimed the lives of at least 10,000 people, including almost 4,000 civilians, according to UN data.

Acknowledging that the “UK’s support for Saudi Arabia’s military intervention in Yemen has been extensive,” the ministers said there’s currently no real risk of Saudi violations of international humanitarian law in Yemen.

The Foreign Office noted, however, that “UK defense personnel are unable to form a complete understanding of the [Saudi-led] coalition’s regard for IHL [international humanitarian law] in its operations in Yemen as they do not have access to all the information required to do so.”

“The UK does not have any embedded personnel taking part in operations, nor do we have any personnel involved in the Saudi targeting decision-making process. However, the insights obtained by defense personnel into Saudi processes and procedures contribute to our overall view on the approach and attitude of Saudi Arabia to IHL, as part of wider information available to us.”

Campaign Against Arms Trade (CAAT), a UK-based organization working to end the international arms trade, said Riyadh was Britain’s “most shameful relationship,” adding that UK weapons used in Saudi Arabia’s devastating attacks in Yemen have created a humanitarian disaster. According to CAAT, the UK licensed £3.3 billion (US$4.1 billion) of arms to the Saudis during the first 12 months of the Yemen bombardment. 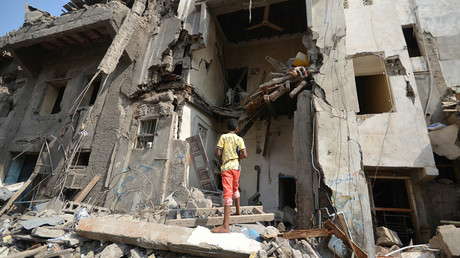 “The government is in denial about the devastating impact of the Saudi-led bombardment and its own complicity in it,” Andrew Smith, media coordinator for CAAT, told the Guardian.

“This is a very weak and shameful response and makes clear that arms company profits are being prioritized over the human rights and lives of Yemeni people.

“The evidence from the UN, the House of Commons committees and others has been overwhelming, yet the government has refused to act. We are always being told UK arms export controls are rigorous and robust, but this shows nothing could be further from the truth,” he added.

The government’s joint statement is a formal response to a report made by two UK select committees in September, which recommended suspension of arms sales pending the results of an independent UN-led inquiry into reports of violations of IHL during the Yemen civil war.

“Since September 2015, the Saudis have announced the results of nine investigations, despite having received evidence of at least 185 incidents from the UN, Human Rights Watch and Amnesty International. Moreover, a number of the Saudi investigations reported results which contradict evidence documented by the UN. This raises concerns about the credibility of the process,” the two committees concluded.

According to Human Rights Watch (HRW) records, since the start of the Saudi-led air campaign in Yemen – which began on March 26, 2015 – the coalition, with direct military support from the US and assistance from the UK, has conducted at least 58 “unlawful airstrikes,” with other human rights organizations and the UN having documented dozens more.  Since the beginning of the war there have been multiple reports of Saudi jets targeting schools, hospitals, marketplaces and other civilian buildings.

Airstrikes carried out by the Saudi-led coalition are responsible for the majority of civilians killed in the ongoing conflict, the UN found in August, while calling for an international investigation into the coalition’s violations there.

“OHCHR has documented incidents in which airstrikes by the coalition forces had an impact on localities with a high concentration of civilians, including markets and residential areas, as well as on events such as wedding ceremonies, frequently incurring high casualties and causing substantive infrastructural damage,” the Office of the United Nations High Commissioner for Human Rights said in a report.