Cyril Ramaphosa, the new president of South Africa’s ruling ANC, wants to seize land from white South Africans without compensation as part of a policy of “radical economic transformation.”

South Africa’s Cyril Ramaphosa, the new leader of the governing party ANC, said on Thursday he aims to stamp out corruption and pursue a policy of “radical economic transformation” that will speed up expropriation of land without compensation.

“This conference has resolved that the expropriation of land without compensation should be among the mechanisms available to government to give effect to land reform and redistribution,” he said in his maiden speech delivered in the early hours after a long delay.

Any move by the government to take land without compensation would bring a comparison to neighboring Zimbabwe, which launched a seizure of white-owned commercial farms in 2000.

Ramaphosa, a 65-year-old union leader who became a businessman and is now one of South Africa’s richest people, is likely to become the country’s next president after elections in 2019, because of his party’s electoral dominance. The current embattled leader of South Africa, Jacob Zuma, could remain as president if he is not forced out and does not resign after the change in party leadership.

Ramaphosa has promised to fight rampant corruption and revitalize the economy, a message hailed by foreign investors.

Nothing says “fighting corruption” like starting your presidency with land seizures and bank nationalizations. After all, it worked out great in Zimbabwe. 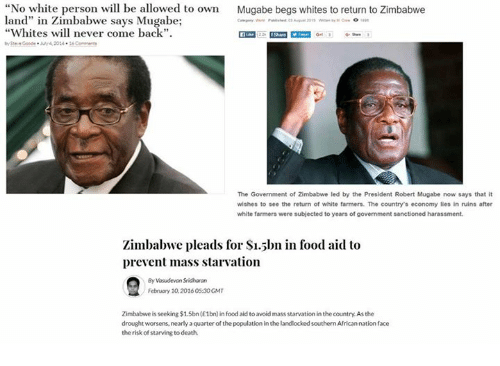 On the land issue, Godongwana said some of the delegates became “rowdy” during the heated debate that “nearly collapsed the conference”. ANC officials rejected reports that delegates had come to…