Looking for a reason for the upsurge in radical socialism, don’t blame Trump, blame the Fed. 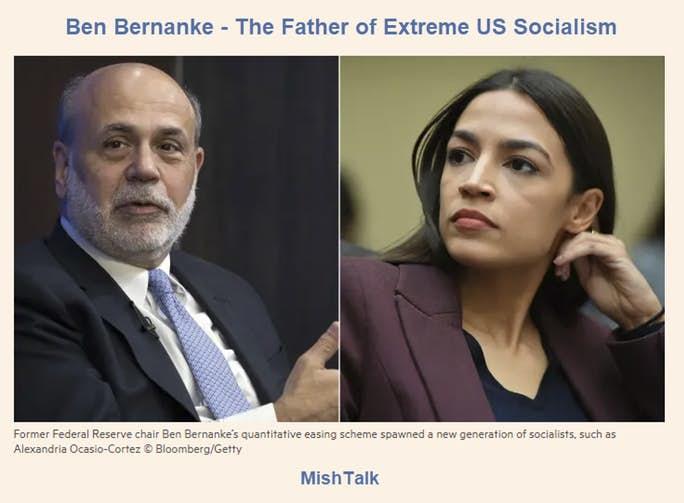 Writer David McWilliams penned an excellent article in the Financial Times:Quantitative Easing was the Father of Millennial Socialism.

McWilliams notes that Fed chairman Ben Bernanke’s “cash for trash” QE scheme drove up asset prices and bailed out the baby boomers. The cost of course, was pricing millennials out of the housing market.

What assets do millennials have? Hardly any. Instead they are saddled with mountains of student debt which, thanks to president George W. Bush, could no longer be discharged in bankruptcy.

The Bankruptcy Reform Act of 2005 would have better been called the Debt Slave Act of 2005.

The irony in this simmering stew of anger is people blame Trump, not the Fed.

But socialism, even AOC’s radical socialism is not about Trump, at least directly.

I had a lengthy phone conversation with David Stockman after I finished reading his new book, “Peak Trump”.

The first thing I said to him was “This really isn’t about Trump, is it?”

He laughed, then responded along the lines of, “You are correct. Trump is a symptom of the problem. He wanted to drain the swamp but failed to do so. He never really had a good chance of doing that, but he failed to make the most of the chance he had. We are where we are because of decades of Congressional and monetary mismanagement.”

I gave his book two thumbs up in “Peak Trump” by David Stockman: Book Review

Trump Won the Election Because