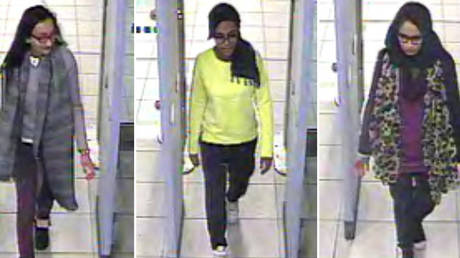 A British teenage ISIS recruit who left home to fight for the self-styled caliphate has called on her government to bring her home from Syria, but the UK security minister has warned that “actions have consequences.”

Shamima Begum was one of three schoolgirls from Bethnal Green in East London who traveled to Syria four years ago to join Islamic State (IS, formerly ISIS). She has pleaded to be allowed back into the UK in an interview with the Times.

However, government minister Ben Wallace told BBC Radio 4’s Today program that he would not risk the lives of British officials “to go looking for terrorists or former terrorists in a failed state.” He warned Begum that she had the right to return, but could face prosecution at the very least.

Begum, a 19-year-old who is nine-months pregnant with her third child, told the newspaper in an interview from a refugee camp in northeast Syria: “All I want to do is come home to Britain.”

She said that her two children died of malnutrition and illness, and she hopes that the baby she is now expecting would be looked after “health-wise, at least” back in the UK.

Begum said she had no regrets about joining IS in Syria, but claimed that she is “not the same silly little 15-year-old schoolgirl who ran away.”

When Wallace was asked whether the UK would be more lenient on someone who was only 15 years old when they ran away, he bluntly insisted: “People know what they’re getting into.”


Begum and her two schoolmates, Kadiza Sultana and Amira Abase, traveled to Syria in February 2015. They joined a fourth Bethnal Green girl, Sharmeena Begum, who had left London at the end of 2014. Each married an IS fighter.

Labour MP for Bethnal Green, Rushanara Ali, says that if the teenager is trying to return to the UK then it is a matter “for the police, security services and the Foreign Office,” who will “need to consider public safety and national security.”