Portland mayor’s office violated the US Constitution by telling police not to interfere with a protest against federal immigration policies, a letter sent by their union said.

For over five weeks since mid-June people in Portland have been protesting against the US Immigration and Customs Enforcement (ICE). City authorities refused to get involved, with Mayor Ted Wheeler, who also serves as police commissioner, saying his officers will not be “sucked into a conflict” and “bailout” ICE, an agency that he believed was “on the wrong track”. At the peak of the protest the immigration agency’s local office was shut down. The protest finally ended on July 25, with the police later clearing the protesters’ camp. 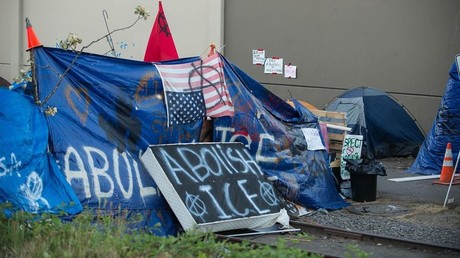 Portland newspaper Willamette Week said local ICE officers claimed that city police failed to respond to two calls by his colleagues, who asked for help after being harassed by protesters. One call came from one ICE employee’s apartment, where protesters showed up after following his truck.

The National ICE Council, a body representing the immigration agency’s employees, alleges that the mayor’s stance amounted to violation of the 14th Amendment to the US Constitution, which requires providing all US citizens equal protection of the laws. “Your policy of not providing police services to employees of ICE creates a class of people based upon their source of income,” Union attorney Sean Riddell wrote in a Cease and Desist letter to Wheeler on Monday.

“We understand that you have a difference of opinion with the current President of the United States, and some of his policies, but we fail to see why targeting the employees of ICE, and leaving them vulnerable to violence, harassment and even death, furthers a legitimate government interest,” the letter said. “Your policy has created a zone of terror and lawlessness.” 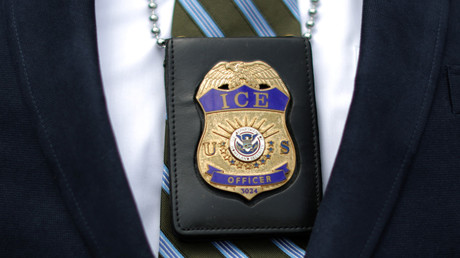 ICE has come into the focus of public ire over its role in enforcing the Trump administration’s controversial “zero-tolerance” policy towards illegal immigrants, which included separating children from their families. State and local authorities in some places have been opposing the federal agency in several ways. For example, Philadelphia, a city where an anti-ICE protest not unlike that in Portland was organized, announced last week that it will end a data-sharing contract with the agency, making it harder for ICE agents to go after immigrants.

On some occasions ICE employees face more personal pressure, as is the case with a controversial database with their public information, which is currently hosted by WikiLeaks. Critics reject the transparency site’s argument that the database is a useful journalistic tool and call it a simple case of doxxing people working for a hated agency.

Senior members of the Trump administration, including Homeland Security chief Kirstjen Nielsen and White House Press Secretary Sarah Huckabee Sanders were also targeted as people, objecting to the immigration policies, refused to serve them at their businesses.While EPA Administrator Scott Pruitt resigned, citing “unprecedented” and “unrelenting attacks” on him and his family.