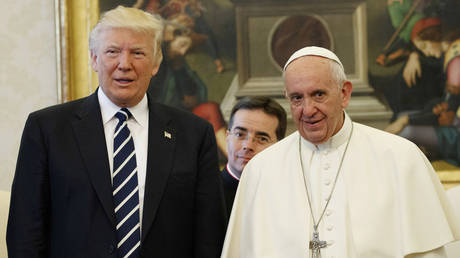 Pope Francis warned leaders who want to erect barriers to keep migrants out that they “will end up becoming prisoners of the walls they build.”

The pontiff was responding to a reporter’s question about migration and US President Donald Trump’s threat to close the US border with Mexico while on the plane back from a papal trip to Morocco.

“Builders of walls, be they made of razor wire or bricks, will end up becoming prisoners of the walls they build,” he said. “I realize that with this problem, a government has a hot potato in its hands, but it must be resolved differently, humanely, not with razor wire.”


This isn’t the pope’s first comment about Trump-style border walls. During the 2016 US election, Francis said that a person who thinks about building walls instead of bridges is “not Christian”, and while in Panama in January, he said: “Builders of walls sow fear.”

During his visit to Morocco, Pope Francis told leaders that migration would not be solved by physical barriers, but with social justice and economic imbalances, and called on wealthy countries to tackle the root causes of migration: war, poverty and political instability.