US Secretary of State Mike Pompeo’s speech at the summit of a neo-conservative pro-Israel pressure group was briefly hijacked by anti-war activists. One of the protesters chanted: “We want peace, we don’t want war!”

Pompeo had just begun his fiery speech at the summit hosted by the United Against a Nuclear Iran (UANI) influence group on Tuesday, when it was disrupted by a series of vocal protests.

The first interruption came as Pompeo gleefully greeted the head of Israel’s Mossad intelligence agency, Yosef “Yossi” Cohen, who was among the audience. As the top US diplomat addressed “my friend Yossi,” a woman approached the podium holding a sign reading “Peace with Iran.” The protester shouted something to Pompeo before two bodyguards escorted her out of the room while attendees booed.

Three protesters at the 2018 summit of the neoconservative anti-Iran group United Against Nuclear Iran (UANI) disrupted the speech of Secretary of State Mike Pompeo today, opposing the drive for another war and calling for an end to suffocating US sanctions. pic.twitter.com/ve8JO2Rf0m

As Pompeo attempted to resume his address, another female protester confronted him. The hijab-clad woman in the back row chanted: “We want peace, we don’t want war!” and “Sanctions are weapon of war!.” The protester also faced a chorus of boos from neocon pundits, with some of them shouting for her to “get out.” The woman was promptly removed from the auditorium.

Pompeo then tried to turn the protest into another lecture on how Iranians should act in their own country.

“This is the second time I’ve had someone interrupt a speech on this topic, and I’ve reminded them all that it would be a wonderful thing if they could protest like that in the country of Iran,” he said to a round of applause.

After the rocky start, Pompeo continued his speech, taking aim at the European Union for its decision on Monday to create special payment channels with Iran.EU signatories are working hard to save the Iran nuclear deal that the US has pulled out of, and is now doing its best to dismantle with sanctions and threats to choke off Iran’s oil exports. 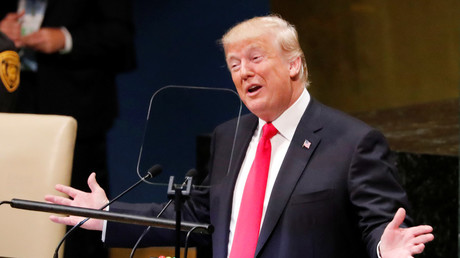 Pompeo said that he was “disturbed and indeed deeply disappointed” by the EU’s move, calling it “one of the most counterproductive measures imaginable for peace and security.”

Pompeo was speaking the same day US President Donald Trump and his Iranian counterpart Hassan Rouhani traded barbs at the UN General Assembly session. Taking the floor, Rouhani accused Washington of trying to topple the Iranian government, saying that it was “ironic” that US authorities are not even trying to conceal their plan to “overthrow” him, while, at the same time, inviting him to join them at the negotiating table.

Earlier, Rouhani had blamed the US for enabling the terrorists behind the deadly attack at the Ahvaz military parade, stating that the US goal was to “cause chaos and unrest in our country.”

Under the Trump administration, Washington has been ramping up hostilities towards Tehran, withdrawing from the internationally-acclaimed 2015 nuclear deal and openly waging a propaganda campaign aimed at whipping up anti-government sentiment.

In July, Pompeo announced that the State Department had launched a 24-hour Farsi-language channel in support  of “the long-ignored voice of the Iranian people,” that would reach out to people in Iran and beyond through all media available, including social media, radio and TV.