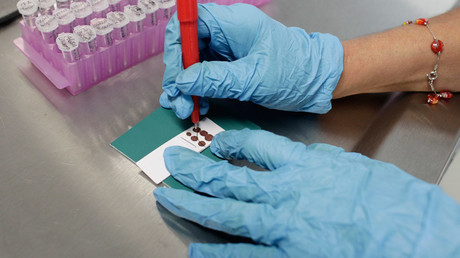 It’s no secret that there is a genetic aspect to our looks ‒ how many times have you heard you look like a relative? It turns out that specific genetic mutations are responsible for many facial features, from nose size to face width, a new study finds.

Researchers led by John Shaffer, assistant professor of human genetics at the University of Pittsburgh, analyzed the genomes of more than 3,000 people with European ancestry. The subjects then had 3D scans done of their faces, which the scientists used to focus on 20 different facial traits, including measurements and sizes across different areas of the face.

The team then employed genotyping to compare the traits from their sample group to nearly a million variations across the genome to find any associations.

They found seven genome-wide associations for five different facial traits: forehead width; eye width; nose width and length; and the distance from the middle of the eyes to the ear.

“What is exciting is that many of these associations involve chromosomal regions harboring genes with known craniofacial function,” said study co-author Seth Weinberg, an assistant professor at Pitt’s School of Dental Medicine, according to The Mirror. “Such findings can provide insights into the role genes play in the formation of the face and improve our understanding of the causal factors leading to certain craniofacial birth defects.”

The study, which was published on the website of the PLOS Genetics journal on Thursday, built on a 2014 study by Mark Shriver, a professor of biological anthropology at Pennsylvania State University, and Peter Claes, a post-doc researcher at the Catholic University of Leuven in Belgium, published in the same journal, called “Modeling 3D Facial Shape from DNA.”

Such findings can help not just with understanding birth defects and “syndromes in which the face is affected,” but also with fighting crime. As far back as the 2004 Madrid train bombings, DNA has been used to find out more about suspects. In that case, forensic geneticists were able to correctly deduce the ancestry of a suspect, New Scientist reported in 2009.

Since then, the technology and geneticists’ knowledge have only improved. When Shriver and Claes published their work in 2014, New Scientist asked them to predict the appearance of one of the magazine’s former reporters based on a scan of her DNA performed by the company 23andMe.

“I believe that in five to 10 years’ time, we will be able to computationally predict a face,” Claes said at the time.

His prediction may have been far too conservative: Last January, police in Columbia, South Carolina, released a computer-generated image of a suspect based only on DNA found at the scene. It was the first time a sketch was built on genetics, according to the New York Times.

Parabon NanoLabs, which created the image, has offered its services to other law enforcement agencies. It currently has 19 more images of suspects in its composite gallery.

Of course, one of the reasons that such DNA-based reconstruction hasn’t gone mainstream for creating wanted posters is that the original study was too small, and didn’t cover enough different populations to be sure that the variants they found were statistically reliable, Claes said.

Yet the researchers at Pitt believe that their study has brought forensics closer to that goal.

“Our ability to connect specific genetic variants to ubiquitous facial traits can inform our understanding of normal and abnormal craniofacial development, provide potential predictive models of evolutionary changes in human facial features, and improve our ability to create forensic facial reconstructions from DNA,” they wrote.