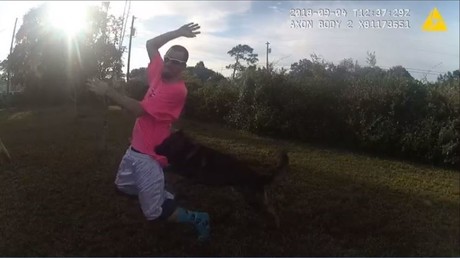 A police canine is being hailed a hero after it chased down and apprehended a man suspected of stealing a car and leading cops on a high speed chase through Florida.

Police body cam footage has been released showing how K9 officer Shep meted out ‘woof justice’ to the fleeing suspect, who had abandoned a child inside a vehicle thought to be stolen.

The attempted escape on foot came after a high speed police chase. However, the man’s bid to evade the cops was stopped in its infancy by what one might call the long fang of the law –  shep’s mandible and four-legged running power.

The police K9 was deployed by Pascoe Sheriff’s deputy Nick Carmack after a traffic stop escalated and the suspected car robber fled on foot into a property. Footage of the subsequent arrest reveals how the police dog jumped a wire fence before sinking its teeth into the suspect’s buttocks.

Shep was later involved in the arrest of a second suspect. The two men have been charged with grand theft auto, criminal mischief and child neglect, because there was an infant in the vehicle during the high speed pursuit.