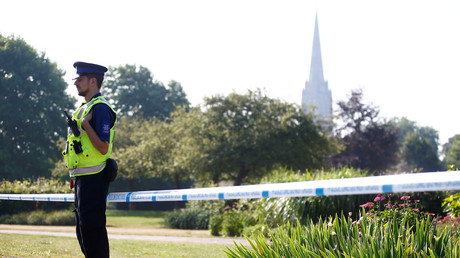 Salisbury police have placed a Prezzo restaurant on lockdown and cordoned off the surrounding roads after two people fell ill there.

Police were called to the area on Sunday evening following the incident involving a man and a woman at the Italian cuisine chain, Wiltshire Police wrote on Twitter.

“As a precautionary measure, the restaurant and surrounding roads have been cordoned off while officers attend the scene and establish the circumstances surrounding what has led them to fall ill,” the statement said.

The scare comes in wake of media reports surrounding the poisoning of Sergei Skripal, a former Russian double agent, and his daughter Yulia in Salisbury this March. The UK immediately pinned the blame on Russia for the incident. In September, UK police named the suspects behind the poisoning as Alexander Petrov and Ruslan Boshirov and released their photos. The men then gave an interview to RT’s editor-in-chief, Margarita Simonyan, where they said they had been wrongly accused by the UK. Although they claimed they went to Salisbury as tourists and suggested that more CCTV footage would prove that, London was quick to denounce the interview as a blow to the “public’s intelligence.”

Russia has repeatedly denied any claims of involvement in the Skripal case. On Saturday, the Kremlin spokesman Dmitry Peskov said that Petrov and Boshirov are not linked to the Kremlin or the Russian President Vladimir Putin in any way.