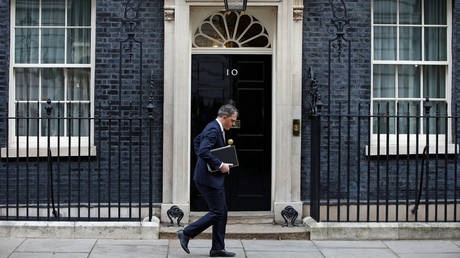 Prime Minister Theresa May’s key enforcer of party discipline, has hit out at her Tory cabinet, claiming ministers have tried to “destabilize” the beleaguered leader and accused them of terrible “ill-discipline.”

Chief Tory whip, Julian Smith, launched the stinging attack in a documentary headed by the BBC’s political editor, Laura Kuenssberg, to be aired later on Monday. In a preview clip, Smith criticizes May’s government for not being “clearer” with the public about the consequences of losing their outright majority at the 2017 general election.

The chief whip claims May should have changed tack and pursued a ‘softer’ Brexit, due to the parliamentary arithmetic. The remarks come as May’s cabinet are at loggerheads over whether to accept a customs union to break the Brexit impasse in the House of Commons or opt for a hard ‘no-deal’ exit from the EU.

In an interview with the Telegraph, Transport Minister Chris Grayling dismissed the idea of a customs union. He argues that such an arrangement would mean countries like Lithuania having “more power” over Britain’s trading relationship than UK ministers.

Grayling’s comments came after cabinet colleague, David Gauke, suggested on Sunday, that May would have to look “very closely” at a customs union if MPs opted in favor of it, during the second round of indicative votes on Monday.

I don’t think it’s sustainable to say we will ignore parliament’s position and we’ll leave without a deal.

In the wake of the PM’s defeat of her EU Withdrawal Agreement at the third attempt, by 58 votes, on Friday, a group of cabinet ministers urged May to reject a softer Brexit and “embrace no-deal,” according to Sky News’ Faisal Islam.

Former Brexit minister, Steve Baker, told May in the House of Commons that in light of the third defeat for her Brexit deal, it was time for her to “follow through on her words” and resign as prime minister.

May told her Conservative Party colleagues on Wednesday that she will resign as soon as she gets her Brexit deal through Parliament – when that will be exactly, is anyone’s guess.