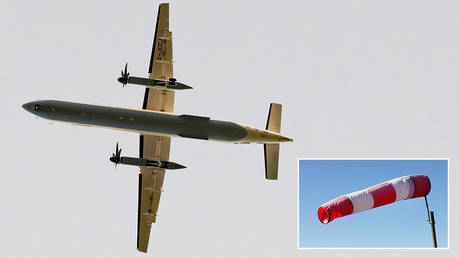 As the UK was lashed by strong gusty winds throughout the weekend, dramatic footage taken at a northern airport shows one pilot’s desperate battle to take off in some of the worst conditions imaginable.

Passengers screamed in terror as the Flybe turboprop plane was buffeted by ferocious gales, at one point turning perpendicular to the runway it was taxiing along at Newcastle International Airport on Sunday, such was the force of nature.

Cameraman Jonathan Winton captured footage of the plane’s ropey takeoff and uploaded it to Youtube as the first clip in a compilation of planes battling the elements at the airport.

“The conditions were cold, wet and windy. Altogether not the most pleasant for being stood outside in,” Winton, who spent three hours outside in those miserable conditions, wrote on YouTube.

Blustery showers swept across the country to leave a cold and windy day on Sunday. A gust of 82 mph was reported at Berry Head in Devon 🌬️ pic.twitter.com/M9CUn46hVs

“One Flybe Dash8 flight almost diverted to Leeds Bradford as the wind increased in intensity and was gusting up to 40kts (74kph). As a direct crosswind this obviously makes the conditions for landing a lot tougher than if say the wind is gusting directly from the west or east.”

Gusts of 82mph were recorded in some parts of the UK on Sunday, as pilots struggled to take off, land, and generally make it through the awful conditions mother nature created throughout the day.