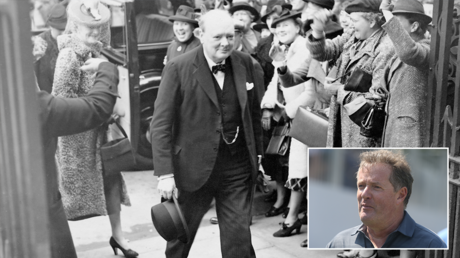 Morgan had invited Ross Greer, who he labeled a “thick ginger turd” on Twitter, onto his Good Morning Britain show. It followed a war of words between the pair, which was triggered by the Green Party MSP’s controversial characterization of Churchill, who most Brits see as a war hero.

Greer defended his comments, which he said reflected a “rounded view of history.” Morgan, however, interjected to accuse the politician of being a “Churchill hater,” prompting a volley of harsh words between the two men.

The Scottish politician called Morgan a “snowflake” for the way he was conducting the interview. The TV host responded by claiming that Churchill had “dragged the country from the abyss,” which Greer insisted was a “wildly ahistorical” viewpoint, adding that it was time to consider other perspectives.

Morgan’s co-host, Susanna Reid, sided with her colleague, arguing that everyone celebrates Churchill as a hero. Greer firmly refuted this assumption, claiming that many people in parts of Britain, as well as India, Ireland and Kenya have no love for the former PM.

Greer argued: “When a mass famine broke out in India, for which he [Churchill] was significantly to blame, the Bengal famine, he said it was their own fault because they bred like rabbits.”


It’s not the first time Morgan has rowed over the British war icon. In October 2018, he clashed with Professor Kehinde Andrews over his claim that Churchill was an “imperialist racist.”

Morgan responded by saying that he wouldn’t be made to feel ashamed of his country; claiming that “if it hadn’t been for Winston Churchill… I think we probably wouldn’t have had the stomach to take on Hitler.”