Police in Maricopa, Arizona – a suburb of Phoenix – will start using a surveillance drone in tactical operations, joining the law enforcement in Baltimore, New York and Oakland in using the technology.

The unmanned aerial vehicle (UAV) will have a FLIR thermal camera and a 3x zoom camera, as well as improved GPS transmitters. The drone can fly day or night, at a maximum speed of 35-miles an hour,

“You’re looking for those tools to be able to increase your manpower,” Maricopa Police Chief Steve Stahl told KNXV. “You may have a barricaded subject in the house – you want to be able to view that enclosure, so to speak, from a safe distance.”

The drone will be a specially modified DJI Matrice 660 model, made of carbon fiber and equipped with six propellers. It can risk losing two of them and stay airborne, police said.

The department is planning to have seven sworn and civilian employees trained to use the drone by mid-October. In order to protect privacy, they will be required to acquire court-issued warrants for investigations and surveillance, Chief Stahl said.

The Phoenix suburb with some 45,000 residents shares the name with the neighboring Maricopa County, whose former Sheriff Joe Arpaio gained notoriety for allegedly using racial profiling in police stops and keeping detainees in an open-air jail in a state where temperatures usually reach in the 100s.

Arpaio lost his 2016 re-election bid to a Democratic challenger. In July this year, a federal judge convicted Arpaio of contempt of court, but President Donald Trump pardoned the ex-sheriff and one of his most outspoken supporters in late August.

Arizona police already use helicopters and other aircraft for search and rescues, surveillance, and to support officers on the ground in dangerous situations.

When Trump held a rally at the Phoenix Convention Center on August 23, Phoenix police used an overhead plane with a high-tech camera that is capable of following, tracking and seeing a target from miles away in most flying conditions,  the Arizona Republic reported citing to Federal Aviation Administration documents. 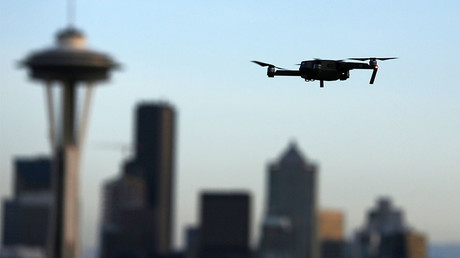 Arizona Governor Doug Ducey signed legislation in May to limit where people can and cannot fly commercial drones in the state. The measure excluded cities from enacting their own restrictions. It went into effect in August.

Citizens should not be concerned over their privacy, said Mesa, Arizona police aviation administrator John Cauthen.

Across the US, police in cities such Baltimore, Maryland; Oakland, California; and New York City engage in constant aerial surveillance to fight crime.

In April, Massachusetts State Police used surveillance drones equipped with cameras to keep an eye on more than 30,000 runners and around a million spectators at the Boston Marathon.

In August, the US Secret Service said they were testing using drones for surveillance as a new way to protect Trump while he stayed at his golf club in Bedminster, New Jersey.

The American Civil Liberties Union has called for a set of national rules that would allow police to benefit from technology without creating “a ‘surveillance society,’ in which our every move is monitored, tracked and recorded and scrutinized by the authorities.”