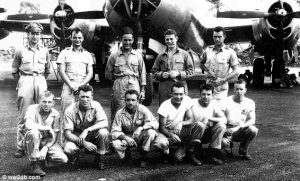 Japan absorbed WWII. The collective memory was tidied up. Little is taught about the war in modern Japanese schools, and even less of what is taught is true. There seems no reason to bring up all those bad deeds and rotten memories. For the most part, the Japanese created their own alternate history of the war.

So it is all the more shocking that a Japanese university opened a museum acknowledging that its staff performed vivisections on a handful of downed American airmen (above) during World War II. The incident has been previously documented by both sides of the war, but the very public and ongoing acknowledgment of the atrocity at the site where it was committed is quite unusual for Japan.

The newly-opened museum at Kyushu University explains how eight U.S. POWs were taken to the center’s medical school in Fukuoka after their plane was shot down in May 1945. The flyers were subjected to horrific medical experiments. Doctors dissected one soldier’s brain to see if epilepsy could be controlled by surgery, and removed parts of the livers of other prisoners as part of tests to see if they would survive. Another soldier was injected with seawater, in an experiment to see if it could be used instead of sterile saline solution to help dehydration.

The airmen so tortured were aboard a B-29 on a bombing raid over Fukuoka. They all bailed out when their aircraft was rammed by a Japanese fighter.

The ethics of hell come into play when we think a bit on what those flyers were doing in the skies over Fukuoka: dropping bombs in hopes of burning, shredding or maiming as many Japanese as possible.

The US at this late stage of the war was as a strategy not discriminating between “military” and “civilian” targets, and often conducted mass firebombing raids over cities. Thousands of incendiaries were dropped simultaneously in hopes of creating a firestorm, a conflagration that burned hot and long enough to literally suck the oxygen out of the air and kill everything beneath it.

I have a history of the war on my bookshelf that makes quite a point of being horrified, with no obvious irony, that when the Japanese captured another group of shot-down B-29 crewman from firebombing missions, the flyers were burned alive in an impromptu fire; some others were killed with boiling water. It says elsewhere a negotiated peace was impossible when one side was fighting for civilization and the other represented barbarism.

Same kind of thing in an actual description from another book of one of the terrible things that happened in the Pacific War: “As the bodies started to sizzle, their arms and legs twitched, and they sat up as if they were alive. Smoke came out of their eye sockets, their mouths opened, and licks of flames came out. Their lungs were full of steam, and hissing noises came out.”

Did that description come from the firebombing of a Japanese city, or from the burning alive of American prisoners? It was one of the…