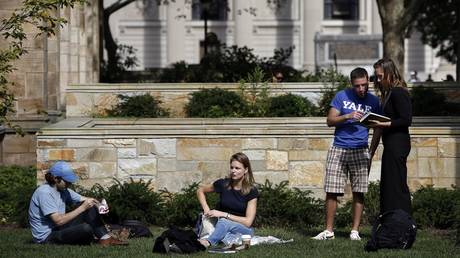 A Yale University student has pledged to monitor “white boys” on campus and document any potentially embarrassing behavior – in hopes of sabotaging their future careers. RT analysts weighed in on the controversial op-ed.

Isis Davis-Marks, a senior at the Ivy League school, vowed in an opinion piece published by the Yale Daily News that she would not allow “white boys” with “great ambitions” to enter the halls of power without first being held accountable for any politically incorrect transgressions made during their time at Yale.

Regretting that she hadn’t documented past “white boy” misdeeds (such as “an unintentional utterance that he made when he had one drink too many at a frat party during sophomore year”) she stated: “I can’t do that anymore — I can’t let things slip by. I’m watching you, white boy.”


Analysts told RT that the op-ed reveals the dark side of the crusade to eradicate politically incorrect speech and behavior.

The sentiment expressed by the student columnist is a textbook case of using intimidation to push people down and make them “look over their shoulders,” political analyst and radio host Dave Perkins said, adding that such tactics were characteristic of “totalitarian states.”