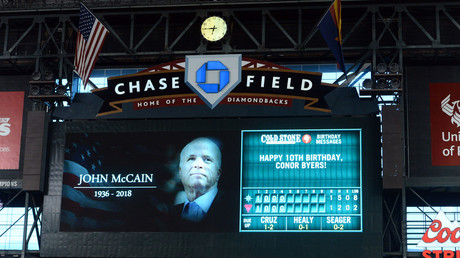 The death of John McCain caused mixed feelings and triggered a heated debate over the American values represented by the Republican. While some commended McCain’s patriotism, others questioned his moral integrity.

Following the announcement of 81-year-old John McCain’s death, the public took to social media to express their condolences and share mixed feelings about the Republican’s life and deeds. Amid an endless outpouring of sympathies for the McCain family, some chose to challenge the massive praise McCain received posthumously.

In his 36 years of service in Congress, McCain had acquired a reputation as a maverick Republican who was not shy about throwing American troops in harm’s way. Over the years, McCain advocated for military intervention in a number of countries including Bosnia, Kosovo, Georgia, North Korea, Iraq, Afghanistan, Iran, Syria, Kuwait, Libya, Nigeria, and Mali.

The entire establishment is in agreement that Mccain was a hero. Meanwhile almost every single conservative rightly abhors him for a multitude of reason such as helping the FBI frame Dt as a Russian agent, arming radical Islamists, asking the IRS to ruin conservatives etc etc

This is a map from 2013 of the many countries where unrepentant warmonger John McCain had called for US military intervention:
– Syria
– Iraq
– Afghanistan
– Libya
– Kosovo
– Nigeria
– Bosnia
– North Korea
– Iran
– Russia
– Sudan
– Mali
– China https://t.co/TWcX2RSNYupic.twitter.com/RsCXLDrV5Y

I have no sympathy to #McCain and he was no hero. War criminal yes. The guy was responsible for hundreds of AMERICANS deaths in Vietnam, giving up American positions while captured. #traitor#liberal oh and I served my country honorably don’t@ me if you have your thong on reverse

Calling him a ‘warmonger,’ some users recalled McCain’s rendezvous with Syrian militants and even accused him of conspiring “with Hillary and Obama to create ISIS.” Others directly accused the deceased senator of pursuing his ideals at the cost of entire nations and wanting “to wipe Syria, Iran, Iraq, Palestine, and Vietnam off the map.”

If you are a non-interventionist, you should already know that McCain was a war monger, in the pocket of military industrial complex and is responsible for hundreds of thousands of dead. He meddled for war in the Middle East and Ukraine. He was an evil, entitled, heartless man.

Oh god bless John McCain. His only crime was wanting to wipe Syria, Iran, Iraq, Palestine, and Vietnam of the map. God bless the man who unapologetically championed for the slaughter of entire nation’s but yeah the people who are glad he’s dead are the real assholes

“If you are a non-interventionist, you should already know that McCain was a war monger, in the pocket of military industrial complex and is responsible for hundreds of thousands of dead. He meddled for war in the Middle East and Ukraine. He was an evil, entitled, heartless man,” one user tweeted.

When John McCain ran for President in 2008, the media called him sick in the head, unfit for office, and a white supremacist.

Now they all pretend to care about him, it’s a fake and sick game by sociopaths, they destroy a man when he opposes Democrats. Now they love him!

Amid the torrent of praise from acting and former politicians as well as public figures, some people claimed that, while McCain was a useful “tool” of the GOP, his public image and policies nonetheless tarnished the entire Republican party’s reputation.

John McCain was a Judas Iscariot, a traitor, to the GOP. I’m sorry his family is in pain, but mhaopy he is no longer in the US Senate @LouDobbs@seanhannity