Rail passengers in Wales were abandoned at a station after being told that the train they were traveling on – which had no working toilets – would make a special stop to allow commuters to go to the bathroom.

Passengers boarded the bathroomless train at Haverfordwest, West Wales to make the two-and-a-half-hour trip to Cardiff. They were told over the PA system that those in need of a loo break could take advantage of a longer stop at Carmarthen so they could relieve themselves – but that’s where it all went wrong. 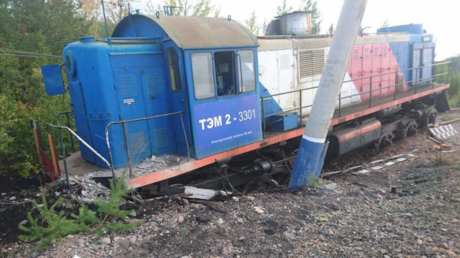 Travelers who had exited the train to avail of the toilet break watched in horror as the locomotive took off without them, despite the promise that it would wait for them to finish their business.

One stranded commuter told the Sun that after disembarking from the train, passengers “heard a whistle being blown” and then watched open-mouthed as the train pulled out of the station. “We managed to find an official who said he had not been told about the train waiting,” the passenger said.

Another passenger said that it “was just the latest in a long list of problems” for Arriva Trains Wales. “It’s crazy none of the toilets on the train were working – there wasn’t even an explanation as to why.”

Among those abandoned was also a 15-year-old girl who was traveling to Cardiff for a day trip with friends. The train left the girl stranded, with her friends and luggage still on the loo-less locomotive.

Her friends waited at the next station in Ferryside, 10 miles away. The teens called the operator and the train was stopped at Swansea so their bags could be removed from the carriage. They caught the train, picked up their bags, and continued their journey but described the day as “ruined,” and the actions of the railway company as “disgraceful” and “thoroughly upsetting.”

Arriva Trains Wales has since apologized, with a spokesperson saying that the transportation service is “sorry for the upset and inconvenience caused by this issue,” and a “full investigation into the circumstances surrounding the event” will be carried out.

This is the latest blunder for Arriva Trains Wales, after the service provider forced a passenger to forfeit more than £10 ($13) to get his money back in his lost wallet. “So my lost wallet was found by @ArrivaTW and they charge me £2 ($2.60) to release it, then take 10 percent of the cash that was in the wallet!” 28-year-old Adam Howells said on Twitter.

Bet my money wouldn’t though as I had to get it back out of your ticket office till! Good job I collected!

Howells revealed that the money had been taken from his wallet, and he was “given a ticket to go and get it from the ticket office,” he said, adding that “they weren’t even sure if they had enough cash to give me.”

Yes, I was given a ticket to go and get it from the ticket office. They weren’t even sure if they had enough cash to give me.