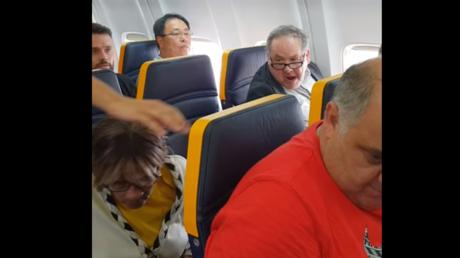 A Ryanair passenger was captured on camera verbally abusing a black woman who had the misfortune to be seated near him. In video of the incident, the man unleashes a torrent of racist abuse as other passengers look on in horror.

Footage of the outburst was shared by passenger David Lawrence who filmed the incident on Friday on Ryanair flight FR9015 from Barcelona to London. It has been viewed nearly 2 million times on Facebook and shared by over 24,000 social media users.

The clip shows cabin crew attempting to calm the irate passenger down as he continues to hurl racist abuse at the woman, calling her an “ugly, black b*****d”.

“I tell you what, I hope someone sits there because I don’t want to sit next to your ugly face, your ugly f*****g face,” he shouted. When the woman attempted to respond quietly he screamed: “Don’t talk to me in a f*****g foreign language you stupid ugly cow.”

The incensed man also threatened the woman, saying: “I’ll tell you this. If you don’t go to another seat, I’ll put you into another seat,” before she asked to be moved to sit beside her daughter. One passenger sitting behind the victim attempted to intervene and tell the man to be quiet as cabin crew appeared unsure how to control the situation.

If this is @Ryanair, they need to explain how this man’s disgusting racial abuse of the black lady in the seat next to him ends up with HER being asked to move. It is beyond beliefhttps://t.co/OhBfpXHaNG

There should be zero tolerance for bigots like this. Kick his ass off the flight, or face the inevitable consequences of allowing this disgusting behaviour on your airline. Man Refuses To Sit Next Elderly Black Woman On Ryanair Flight To London | HuffPost https://t.co/97D7tgT0bd

Lawrence, the passenger who captured the video, and many angry viewers including several MPs, are criticizing Ryanair for failing to protect their passenger by stopping the torrent of abuse sooner. They’re also lambasting the airline for moving the victim, and not kicking the racist off the flight.

He should have been removed from the flight and handed over to the police. We assume the aircraft was in the UK. If it was, he definitely committed criminal offences. I fully expect @Ryanair to confirm the situation if In fact it was their flight? https://t.co/ORfww9ZiPg

Where are all these racists morons coming from? It’s like they’ve appeared from a hole in the ground since the Brexit vote. Come on let’s get this disgusting man found and action taken against him.

Just watched the shocking footage on a @Ryanair aircraft, utterly disgusting. Racist male passenger should have been put off flight before it departed. Flight attendant incapable of responding appropriately. However well done to passenger with black t-shirt that intervened #hero

A spokesperson for Ryanair told RT that the incident has been reported to Essex Police, but did not comment on the airline’s policy for protecting passengers from racism or verbal abuse. RT has reached out to Essex Police for further information.