A student who survived the Parkland school shooting has boasted on HBO that he hung up on US President Trump when invited to his White House listening session. A fellow survivor called him out for his counterproductive behavior.

Marjory Stoneman Douglas High School students David Hogg and Cameron Kasky appeared on the Friday night edition of HBO’s Real Time with Bill Maher – one of the myriad interviews they have landed in the weeks since 17 of their schoolmates and teachers were killed in mid-February.

“I hung up on the White House the other day,” a smiling Hogg said, saying the timing of Trump’s invitation was “very offensive considering the fact that there were funerals the next day, there was mourning we still had to do. 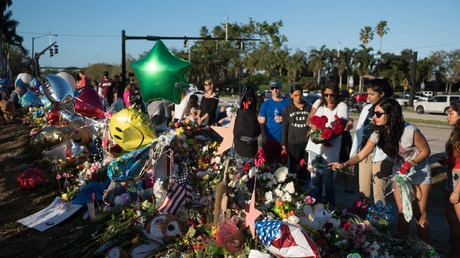 “We appreciate that you are willing to let us rebuild the world that you f****d up,” Kasky added later, after saying he was willing to accept the collective apologies of older generations.

Hogg, Kasky and a number of other students leaped into the media spotlight in the days following the shooting, with their message promoting gun control and a boycott on the National Rifle Association (NRA). The campaign has already cost the NRA a number of financial partnerships as companies were pressured to sever ties with the gun rights lobby.

But fellow student and shooting survivor Kyle Kashuv, who created a mobile phone app to help his classmates get emotional support, slammed Hogg and Kasky for the “inflammatory roles” they played on HBO. He even predicted one might win an Oscar for the performance at Saturday night’s awards.

Who will be watching the #Oscars? I hope one of my fellow students win for their inflamatory roles on @CNN. Which one of them do you think will win?

Earlier Kashuv, who unlike the campaigning students, was not verified by Twitter within a week after the Parkland shooting, chided the pair for hanging up on the president, saying that turning down the opportunity for dialogue was “counterproductive.” It would be “an honor to discuss with you how we can come together to support our common goal: to make sure kids are safe,” he added, addressing Trump.

Hanging up on @POTUS@realDonaldTrump, the man who controls the Executive, is counterproductive to pushing change. Even if you do not like President Trump, one should not disrespect the office that has sat 44 past American Patriots. https://t.co/K1v8gKaM0n

While campaigning for gun control, Hogg and others have been attacking Republican politicians and Trump, accusing them of taking “blood money” which, they claim, enables gun violence.

The United States also has a massive gun violence problem because of “very stupid” politicians that are owned by the NRA https://t.co/wssxtuTzBu

I haven’t had enough time to read R*bi*’s little proposals, but you guys know we don’t have to settle for less, right?

Dirty blood money politicians like him want to throw us 2 pennies and make us thank them on our knees as if they just paid off our mortgage. We won’t have it.

We should change the names of AR-15s to “Marco Rubio” because they are so easy to buy.

You know what matters here? People Keep Dying. Until Politicians care more about People than they do about Money, random and innocent People are going to Keep Dying. #VoteThemOut#NotOnOurWatch#WeCallBS