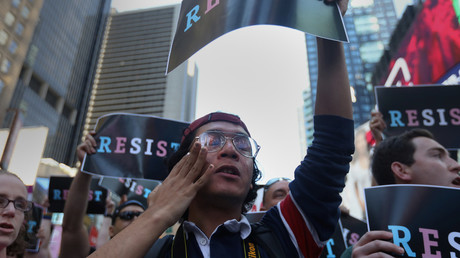 The retirement of Justice Anthony Kennedy from the US Supreme Court sent shockwaves of hysteria rippling through progressive America, as liberals brace themselves for a conservative replacement.

As news of Kennedy’s retirement broke, former Obama spokesman Tommy Vietor summed up the liberal reaction in one word:

Splinter, an online magazine that ran a piece earlier this week calling for civil unrest and bombings against the Trump administration, sounded even more panicked, while HuffPost ran the news under the banner: “Code Red.”

Other media figures were equally distraught at the news. Former CNN anchor Dan Rather described the vacancy as “a fight for the future of democracy,” while Comedy Central called the whole situation “supremely f**ked.”EditDelete

Justice Kennedy retiring… If you are deeply disturbed, absorb the shock. But respond with even more determination. If you see this as a fight for the future of democracy, let those in power know that the will of the majority can still hold sway. https://t.co/lcKhiAgKao

Justice Anthony Kennedy was a swing voter, who authored the ruling in favor of nationwide gay marriage rights in 2015, but also voted conservatively under the Trump administration.

Senate Majority Leader Mitch McConnell said the Senate would vote on Kennedy’s replacement “this fall,” presumably before the November midterm elections if not before the Supreme Court convenes for the next term in October.

President Trump will most likely nominate a conservative judge in the mold of the late Justice Antonin Scalia, who passed away in 2016. An originalist, Scalia believed that the constitution did not guarantee the right to same-sex marriage or abortion, and considered affirmative action policies unconstitutional.

If Trump succeeds in getting a conservative justice nominated, the Supreme Court will have a 5-4 conservative majority for the foreseeable future, regardless of whether or not a Democrat wins the presidency in 2020.

The weight of that implication was not lost on Reddit’s ‘politics’ forum, whose leftist user base went into full-blown panic mode.

“If a blue wave doesn’t happen in November, I’m cutting my losses and planning my way out of this f**king country,” read one comment from user cor_cordis. “This is too much.”

“Democrats need to shut it down. No more diplomatic bullshit. It’s time to take the gloves off,” read another comment from Rise_Above_13, echoing Rep. Maxine Waters’ calls for physical harassment of Trump aides last weekend.

On Twitter, the sentiment was similar. One panic-stricken commenter saw a future where a jackbooted Supreme Court comes after the press, free speech, and the right to assemble.

They will come after Roe v Wade

Same sex marriage may be gone too

Then after that, perhaps it’s free press, free speech, & right to assemble

If that goes I’ll be a refugee in another country

I’m Canadian, so why does the retirement of U.S. Supreme Court Justice Kennedy feel so utterly ominous to me and The Handmaid’s Tale seem even more frightening than it did just yesterday? #SCOTUSnominee#RoeVWade

Democrat Sen. Chuck Schumer (New York) pleaded for the Senate to hold off on confirming Kennedy’s replacement until after the midterm elections in November. Calling the vacancy “the most important Supreme Court vacancy for this country in at least a generation,” Schumer warned that abortion rights, defined by the Roe vs. Wade case of 1973, and gay rights could now potentially be rolled back.

How very cool of Justice Kennedy to pour kerosene on the current dumpster fire that is America. The Roe v Wade riots should provide fine entertainment for him in his retirement.

For starters, abortion rights are more imperiled now than at any time since Roe v. Wade. And there is no reason to think there won’t be a rollback of gay rights, either, with Kennedy gone. https://t.co/awg2oC5uYl

As for Trump’s supporters, Kennedy’s retirement threw them into party mode, as they celebrated their chance to control the nation’s judiciary for a whole generation.

Justice Kennedy has announced that he is stepping down from the Supreme Court.

This is exactly why a Trump presidency was so important for the future of our nation.

We will control the Supreme Court.
We will preserve our culture.
We will Make America Great Again!#maga