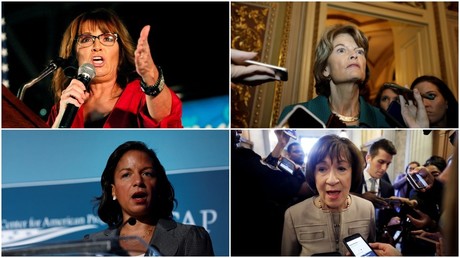 America may see an interesting female showdown as a spin-off of the Brett Kavanaugh saga. Susan Rice and Sarah Palin hinted they may run against Sens. Susan Collins and Lisa Murkowski, who voted in a way they deem unacceptable.

The soap opera begins with Susan Collins (R-ME), who was initially sitting on the fence when it came to whether she would vote in favor of the Supreme Court nomination of Kavanaugh. This invited some of Kavanaugh’s fiercest critics to put pressure on her to vote against his confirmation – pressure which Sen. Marco Rubio (R-FL) called “vicious, vile, and dangerous actions.”

Collins finally put an end to the speculation on Friday, announcing in a 44-minute speech that she would be backing Kavanaugh.

But Susan Collins’ decision angered another Susan by the name of Susan Rice (who served as national security adviser under Barack Obama).

Rice’s discontent was revealed following a tweet by Jen Psaki, who served as Obama’s communications director. “Who wants to run for Senate in Maine?” she tweeted. It took Rice 11 minutes to respond with “me.”

She later clarified that she was not making any announcements, but stressed that she is “deeply disappointed in Senator Collins’ vote for Kavanaugh.”

However, Rice isn’t without her own controversies. For starters, she was serving as national security adviser when the Benghazi attack happened in 2012, which resulted in the killing of four Americans. Republican lawmakers have accused her of underplaying the attack as a random act of violence in response to an anti-Muslim film. However, Obama admitted it was premeditated. She has also been accused of revealing the names of associates of Donald Trump that appeared in intelligence reports last year.

And as with just about anything these days, the internet weighed in on the possibility of Rice running against Collins, with many immediately pledging their support.

Checkbook is ready, I don’t live in Maine, but Ill happily send the limit of $2700 to your campaign.

Others, however, were quick to bring up her past controversies.

Susan Rice is corrupt and would be fully exposed during an election!!

Does Susan Rice think she can make her record clean by then? How will she seal up everything like Obama did.

It goes both ways

But just as Rice is unhappy with Collins for promising to vote in favor of Kavanaugh, former vice-presidential candidate Sarah Palin is mad at Sen. Lisa Murkowski – a Republican from Palin’s home state of Alaska – for crossing party lines and announcing that she will be voting ‘no’ when it comes to Kavanaugh’s confirmation.

Palin tweeted directly at Murkowski, saying: “Hey @LisaMurkowski – I can see 2022 from my house…”

READ MORE: Most ridiculous apologies forced from those who didn’t toe media line on Kavanaugh (VIDEO)

That tweet wasn’t without a dose of humor, as it stems from Tina Fey’s remarkable impression of Palin on Saturday Night Live in which Fey delivered the line “I can see Russia from my house” when talking about foreign policy on the show. While Palin never actually muttered those words, she’s often credited with doing so.

Palin’s tweet came one day after she had urged Murkowski to “do the right thing” when it comes to Kavanaugh.

The former Alaska governor, who ran as vice president on the McCain ticket in 2008, was often mocked for her statements during her run, and long after. Some of her most famous gems include stating that America needs to stand with its North Korean allies and declaring that gun-free zones amount to “stupid on steroids.”

And, of course, the Twittersphere had a few things to say about Palin’s tweet, with responses ranging from eager support to laughs and criticism.

Susan Rice is corrupt and would be fully exposed during an election!!