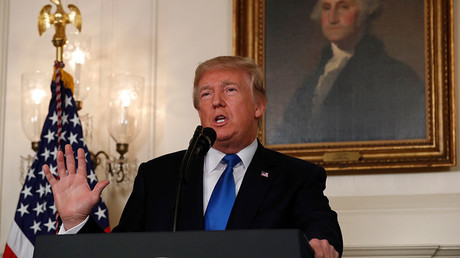 US lawmakers jumped at the chance to give their opinions about President Donald Trump’s decision to decertify the Iran nuclear deal. Some were delighted with Trump’s stance on the deal, while others see the decision as the first step to war with Iran.

On Friday, many high-level Democratic lawmakers vehemently disagreed with Trump’s decision to decertify the Joint Comprehensive Plan Of Action (JCPOA), also known as the Iran nuclear deal, and voiced their concerns to the public.

House Minority Leader Nancy Pelosi (D-California), who worked hand-in-hand with the administration of former President Barack Obama to pass the JCPOA in 2015, called Trump’s announcement a “grave mistake” during a press conference on Friday.

“I say the Iran nuclear agreement was the best way to prevent Iran from becoming a nuclear armed state,” Pelosi said. “The president, I think, is being frivolous with this.”

Representative Adam Schiff (D-California), who was a vocal supporter of the deal before it passed in 2015, released a written statement denouncing Trump’s position on the agreement.

Senator Bernie Sanders (D-Vermont) also came out against the president on Friday with a storm of tweets of his own. The lawmaker said it is now up to congress to “stop this drift toward war,” making reference to the possibility of the US backing out of the deal.

President Trump’s refusal to certify the Iran deal is the latest in a series of reckless moves that make Americans less safe.

“Trump’s own top security officials say Iran is meeting its commitments under the deal and that it is in the security interests of the US,” Sanders tweeted. “Congress should listen to what virtually the entire national security community is saying – that the Iran deal is working – and protect it.”

Sanders supported the JCPOA in 2015 before it was signed into law, but stated that it is not “a perfect agreement,” according to a 2015 interview on CBS’ ‘Face The Nation’ program, the Washington Post reported.

The senator also said in the 2015 interview that the only alternative to the agreement is “war,” and support for the deal would “give peace a chance.”

Former Vice President Joe Biden, who was President Obama’s second-in-command when the JCPOA was formally passed, gave his two cents on the implications of a US exit from the agreement.

John Kerry, who served as Secretary of State under when the deal was signed into law, released a written statement and a tweet on Friday reacting to the far-reaching decision..

As secretary of state, Kerry was instrumental in gaining support from legislators in the months leading up to the eventual passage of the JCPOA in 2015. Kerry plead with lawmakers in groups such as the House Foreign Affairs Committee to get them to support the deal.

Not everyone is hammering the president about Friday’s announcement.

Cotton, one of the more hawkish Republicans in the Senate, released a written statement on Friday praising the commander-in-chief.

The Republican-controlled Congress will now have 60 days in which they can reimpose sanctions against Iran that were put on hold during the 2015 agreement. This can be done through a majority vote now that Trump has decertified the deal.

The JCPOA is an agreement that was signed into law on October 18, 2015, between Iran, five permanent member countries of the United Nations Security Council (including the US) and the European Union. The main focus of the deal is to have Iran agree to cut back on parts of its civilian nuclear program, in exchange for relief from sanctions imposed against them.