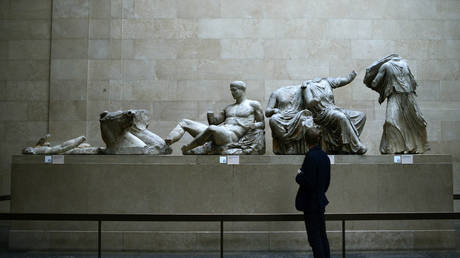 The British Museum is making headlines again after its director Hartwig Fischer sparked backlash for suggesting that the removal of the Elgin Marbles from Greece in the 1800s was a “creative act” and that they won’t be returned.

In an interview with a Greek newspaper, Fischer admitted that while you could be “saddened” by the fact that the famous marbles had been removed from their original environment, “this shifting is also a creative act.”

Fischer rejected the idea that Greece was the rightful owner of the Elgin Marbles, saying that the objects in the British Museum’s collection “are owned by the museum’s commissioners,” and said perhaps Britain could give them to Greece on “loan” — but only if Athens recognized the museum’s ownership of them.

The remarks sparked instant criticism, with George Vardas, the secretary of the International Association for Reunification of Parthenon Sculptures, who tweeted that the “imperial condescension of the British Museum knows no bounds” and said Fischer’s comments displayed “astonishing historical revisionism and arrogance.”

“What was so creative in the destruction of the temple and looting and pillage of a nation’s keys to its ancient history?” Vardas asked in another tweet.

The interview also prompted backlash from Greece which has long sought the return of the marbles. Greek Culture Minister Myrsini Zorba said Fischer’s comments reflected “a narrow and cynical managerial mindset” and accused him of downgrading cultural heritage “from an invaluable universal value to a mere exchange sale.”

While UK law currently prevents Britain from returning the marbles, Greece considers them stolen. Labour leader Jeremy Corbyn has said that he would facilitate their return if he became prime minister.

READ MORE: ‘Temples to colonial theft’: Western museums should return looted artifacts to where they belong

The Parthenon Marbles are only one example of many spoils of the British Empire which are on display in the British Museum. The museum has also refused to return the Rosetta Stone to Egypt and the Koh-i-noor diamond to India, among others. The governor of Easter Island recently made an emotional plea to the museum to return the Hoa Hakananai’a which was taken 150 years ago and given to Queen Victoria as a gift.

RT spoke to museum-goers in London to ask whether the marbles should be returned or not and responses were mixed. “I guess it’s quite nice to have them kept here, perhaps to go home for a period, because exhibitions do move around,” one woman suggested.

Others suggested some kind of “sharing arrangement” could potentially work — but some were adamant that they should be repatriated. “If they were British artifacts in Greece, I think it would be viewed differently. If I was Greek, I would want them returned,” another woman said.