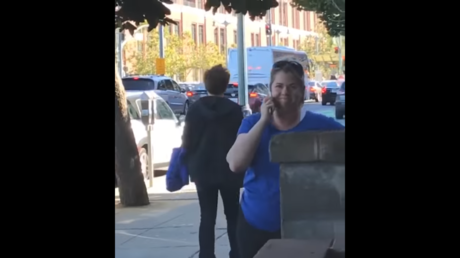 A video showing a white woman in San Francisco reporting an 8-year-old girl to the police for selling water without a permit has gone viral, with people calling out the woman, dubbed ‘Permit Patty,’ for racial bias.

The footage posted by the girl’s mother on Saturday starts with her claiming that the white woman, who can be seen talking on the phone, is alerting police about the girl for selling portable water.

As soon as she approaches the woman to film her face, the caller squats behind a wall in a futile attempt to seek a cover.

“This woman don’t wanna let a little girl sell some water. She’s calling police on an 8-year-old little girl… you can hide all you want,” the girl’s mother said in the video.

As the two face off, the woman who is still on the phone says: “And illegally selling water without permit?” The brawl continues with the mother arguing that the girl did not violate any laws, as she was selling water on the family property.  The mother, identified by local media as Erin Austin,  said the woman didn’t believe the girl lived in the apartment building close to AT &T Park, where the baseball team the Giants was having a home game.

The video has been extensively liked and shared on Twitter and Instagram, with the majority of the commentators jumping to the girl’s defense and chiding the woman for what many see as racial bias and an example of white privilege.

A white woman just called the cops on a 8 year old black girl.

IT IS ALL ABOUT COLOR.

If it was an 8 year old white girl, PATTY WOULDN’T HAVE CALLED COPS.

You and I both know that’s true. #PermitPatty

I hope peoplenotice that suspected white supremacist females like #PermitPatty and #BBQBecky and other are allowed to make bogus 911 calls against innocent Black people because THEY DON’T GET PUNISHED FOR DOING IT.

The girl’s cousin has started a hashtag #PermitPatty on Twitter, calling on those who sympathize with the girl to shame and out the woman. The post was picked up by a number of celebrities, including American actress and activist Gabrielle Union.

IIIIIIIII. CANNOT. Ma’am? MA’AM?!?! 🙄 This woman asks to speak to somebody’s manager on the daily. She permanently wears folks OUT https://t.co/2VXtHDBW5N

The cousin wrote on Twitter that the mother of the girl might file a harassment complaint against the woman.

Some commentators blamed US President Donald Trump for the incident.

Kids have been selling lemonade on the street since ducking Columbus landed on the wrong continent. Nobody has ever given a fuck a out permits for a child trying to earn a dollar….until trump was elected and now only white kids can sell drinks.

While there has been a massive outpour of support for the girl, some pointed out that what the girl was still breaking the law. The cousin, who goes on Twitter by @_ethiopiangold, fired back, claiming that there were plenty of white males in the area that were selling merchandise and tickets, but the woman did not seem to care about whether they had a permit or not and opted to call the police on the little girl instead.

For all of you saying it’s not about race why didn’t she stop to harass the white mean that we’re selling tickets and teeshirts but thought calling the police on a child was okay? Don’t answer. Just ask yourself that.

Thanking all who reached out with the messages of encouragement for the girl, she posted a video showing the eight-year-old with a cart full of bottled water.

‘Permit Petty’ has been compared to another white woman who was nicknamed BBQ Becky after she called police on two black men in Oakland, California, over a charcoal barbecue at Lake Merritt. A video of her call to police surfaced last month and reignited the debate over race.