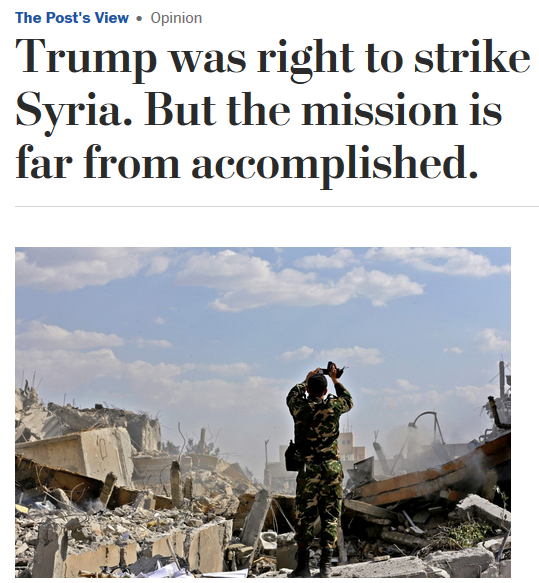 “Only…with the departure of the Assad regime, will it be possible to ensure that Syrians do not suffer more atrocities,” the Washington Post (4/14/18) editorialized.

A survey by FAIR of the top 100 papers in the US by circulation found not a single editorial board opposed to Trump’s April 13 airstrikes on Syria. Twenty supported the strikes, while six were ambiguous as to whether or not the bombing was advisable. The remaining 74 issued no opinion about Trump’s latest escalation of the Syrian war.

This is fairly consistent with editorial support for Trump’s April 2017 airstrikes against the Syrian government, which saw only one editorial out of 47 oppose the bombing (FAIR.org, 4/11/17). The single paper of dissent from last year, the Houston Chronicle, didn’t publish an editorial on last week’s bombing.

Seven of the top 10 newspapers by circulation—USA Today, Wall Street Journal, Los Angeles Times, New York Post, Chicago Tribune, Newsday and Washington Post—supported the airstrikes. The New York Daily News and San Jose Mercury News offered no opinion, while the New York Times (4/13/18) was ambiguous—mostly lamenting the lack of congressional approval, but not saying that this meant the strikes were illegal or unwise. “Legislation should…set limits on a president’s ability to wage war against states like Syria,” is the Times’ conclusion. A complete list of editorials on the airstrikes can be viewed here.

Almost every editorial spoke in the same Official, Serious tone that demanded “action” be taken and “international norms” be “enforced.” Some, such as the Wall Street Journal (4/16/18), went further, insisting on a wider war against the Syrian regime, Iran and/or Russia in vague but menacing terms.

“Barack Obama dealt Mr. Trump a bad hand by letting Russia, Iran and China believe they could advance their goals of regional domination without US resistance,” the Journal insisted. “In Syria as elsewhere, Mr. Trump has to decide if he wants to ratify that American retreat or develop a strategy to stop it.” 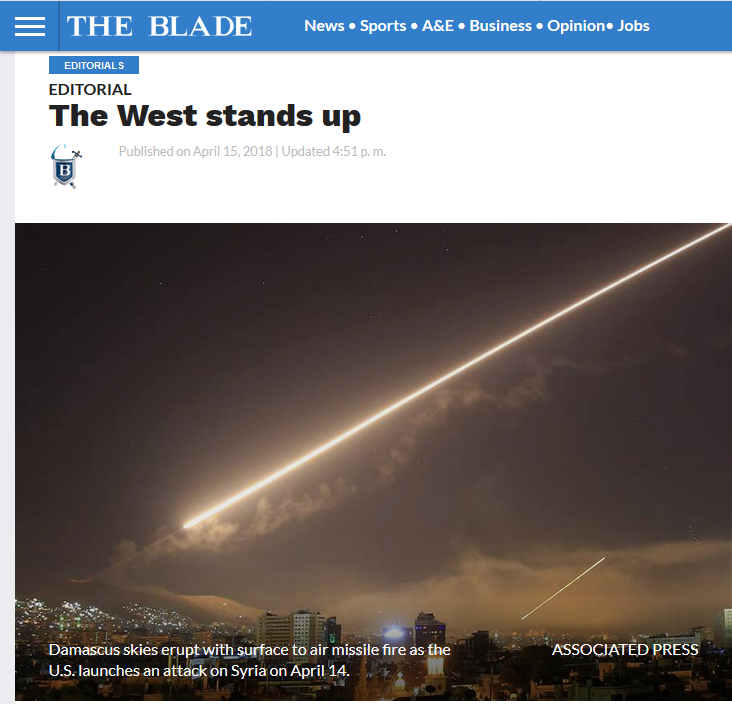 Toledo Blade (4/15/18): “Let’s take a break from the Comey Chronicles to feel proud and send those who protect us…our gratitude and prayers.”

The mid-market Toledo Blade (4/15/18) punched above its weight class and delivered the most bellicose and jingoistic editorial of them all with “The West Stands Up”:

Make no mistake, this was a warning to Vladimir Putin as well as Bashar al-Assad.

The United States and its two longtime allies redrew the red line that had been obliterated by a failure of nerve by the US and the West generally: There will be cost for your barbarities….

If Assad regime officials find themselves catching up on news from the greater Northwest Ohio region, they will surely take heed.

None of the top 100 newspapers questioned the US’s legal or moral right to bomb Syria, and all accepted US government claims to be neutral arbiters of “international law.” Many editorials handwrung about  a “lack of strategy” or absence of congressional approval, but none so much that they opposed the bombing. Strategy and legal sanction are add-on features—nice but, by all accounts, not essential.

The total lack of editorial board dissent is consistent with major papers’ tradition of uniform acceptance of US military action. The most influential paper in the country, the New York Times, has not opposed a single US war—from the Persian Gulf to Bosnia, to Kosovo to Iraq to Libya to the forever war on ISIS—in the past 30 years.

The scope of debate among major editorial boards is not if Trump should bomb the Syrian regime, but how much bombing he should undertake—and when, roughly speaking, he should maybe get around to letting Congress know.