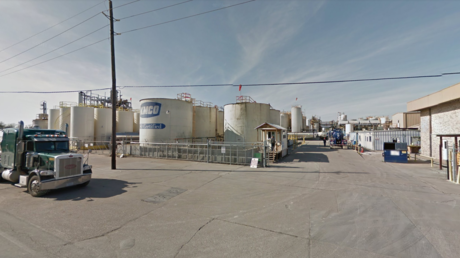 A Texas chemical plant has gone up in flames, spewing black smoke into the air northeast of Houston. One death has been reported, along with two injuries.

The plant, located in Crosby, Texas, went up in flames on Tuesday. Harris County Sheriff Ed Gonzalez said that pops and bangs could be heard coming from the facility, and one person was confirmed dead at the scene. Two more workers have been airlifted to hospital.

Live video feed from the plant shows thick black smoke rising from a yard containing several storage tanks. The column of smoke can be seen from passing Highway 90.

DEVELOPING: There is a shelter in place at nearby schools and two workers are feared hurt and another missing after an explosion and fire at a chemical plant outside Houston, with a smoke plume visible for miles and firefighters trying to stop the blaze. https://t.co/GdQhUIT0iGpic.twitter.com/zZBCTDaPop

Crosby Plant fire: arriving in the general area. Information is preliminary: schools have sheltered in place, a few pops have been heard, air seems to be moving in Southwest direction. #HouNewspic.twitter.com/jFECk4g8AJ

Roads in the area have been closed, residents within one mile of the fire ordered to shelter in place. Flammable isobutylene – a colorless gas used in chemical refinement – started the fire, Sheriff Gonzalez said.

The plant, operated by chemical company KMCO, is the second such facility near Houston to go up in flames in a month. A three-day fire at Intercontinental Terminal Co. gutted the petrochemical plant and spewed dangerous benzene fumes into the air last month. Thousands of locals reportedly sought medical treatment, and the site remains too toxic for investigators to approach.