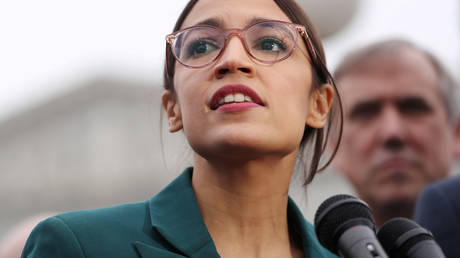 Alexandria Ocasio-Cortez has, once again, raised the ire of many online. This time the freshman congresswoman is being accused of arrogance for her dismissal of critics of the Green New Deal climate initiative she is spearheading.

The ambitious climate plan has attracted numerous detractors with many saying it is unrealistic and unachievable. Speaking at a Girls Who Code event in New York on Friday the 29-year-old hit back at those who shot down the deal, saying, until they come up with a plan of their own, she’s in charge.

Socialist Rep. Alexandria Ocasio-Cortez (D-NY) on the widespread criticism of her Green New Deal: “I’m like, you try. … Until you do it, I’m the boss! How about that?!” pic.twitter.com/vkp15KBttd

“Like I just introduced Green New Deal two weeks ago and it’s creating all of this conversation. Why? Because no one else has even tried,” she said. “So people are like ‘oh it’s unrealistic, oh it’s vague, oh it doesn’t address this little, minute thing.’ And I’m like ‘you try! You do it. Cause you’re not. Cause you’re not.’”

So until you do it, I’m the boss! How about that!

Video footage of the remarks shows they sparked a gushing response in the room. Online, however, it has been a different story with those opposed to Ocasio-Cortez’s political views seizing the opportunity to attack the left wing politician.

Many accused the Democrat of being “entitled” and labelled her “arrogant” for describing herself as “the boss” only a few months into her congressional career.

AM I THE ONLY ONE WHO FINDS THIS COMPLETELY HILARIOUS? Socialist on a Power Trip – Alexandria Ocasio-Cortez Claps Back at Critics of Her Radical Green New Deal “I’m the Boss!” (VIDEO) https://t.co/YyHfwVs989 via @gatewaypundit

She actually calls herself “The Boss!”

You are the most junior newbie out of 435 in the House.

I know you failed Civics 101, but you aren’t “the boss” of anything.

Ocasio Cortez’s new strategy of yelling “I’m the boss” or “I’m in charge” when people don’t like her Green New Deal is going to go over really well with Democratic leadership. pic.twitter.com/UeGShiDvuQ

Tells her critics, “I’m the boss!”

Apparently undeterred by the backlash Ocasio-Cortez doubled down on her stance on Twitter, accusing critics of “shouting from the cheap seats.”

Yup. If you don’t like the #GreenNewDeal, then come up with your own ambitious, on-scale proposal to address the global climate crisis.

Until then, we’re in charge – and you’re just shouting from the cheap seats. https://t.co/h3KSJhHqDN

Our emissions are currently at 1970 levels even though we are driving much more and have more economic activity.

You are trying to destroy our economy for a problem that doesn’t exist. pic.twitter.com/eroU4DdWE0

Young lady, you are not “in charge” anywhere.

You have been elected by a single district to represent those people. Period.

Take a few days off and read a bit about the Constitution and the history of this country.

You are an embarrassment to your district.

Hot take: it is fundamentally unjust that some people have expensive seats while the rest of us sit in cheap seats, and therefore we must redistribute @AOC’s political privilege to marginalized people such as those of us who are not members of Congress. https://t.co/lhDOBmFSLK

However, not all the feedback was negative. Some encouraged the critics to follow Ocasio-Cortez’s advice and develop a climate change strategy of their own while others defended the Green New Deal as a framework for plans to be developed.

Nonsense! @AOC‘s Green Deal is mostly GOALS/TARGETS.
Plans would be made in cooperation w scientists, businesses, politicians,…
to achieve those goals.

AOC just told it like it was to all the white dudes complaining about her existing!

What an ironic tag-line you have, while working so hard to be divisive. @AOC is bringing tons of energy, excitement & fresh perspective. She is engaging so many people who have no interested in politics. And you want to attack HER, as opposed to, say Matt Gaetz?? That’s NUTS. https://t.co/REbLa67rze