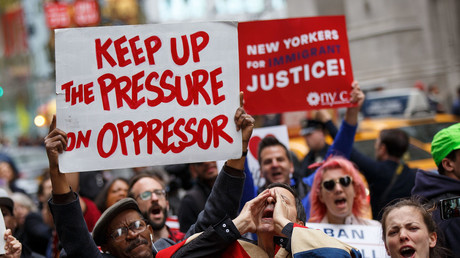 The Obama administration’s AG Eric Holder is fully on board with Hillary Clinton in urging fellow party members to ditch good manners when dealing with Republicans. The GOP has accused Holder of stoking political violence.

The former attorney general was campaigning for Stacey Abrams for Georgia governor over the weekend, when he surprised the audience by saying that Michelle Obama’s famous phrase “When they go low, we go high” is no longer relevant in the heated political climate of today.

Instead, Holder suggested that Democrats get down and dirty.

Holder’s words were welcomed with a round of cheers and applause from the enthusiastic audience. “That’s what this new Democratic Party is about,” he added.

Later in his speech, Holder attempted to tone himself down, saying it wasn’t physical violence he meant, but never explained what it was.

Holder, who himself is considering running for president in 2020, fell in behind former Democratic presidential nominee Hillary Clinton, who in a Tuesday interview with CNN’s Christiane Amanpour said that modern-day Democrats “cannot be civil” when dealing with Republicans.

Like Clinton’s, Holder’s remark was not exactly a hit with conservatives, who refused to buy into Holder’s explanation that he did not mean anything illegal when talking about “kicking” Republicans.

Spokesperson for the National Rifle Association Dana Loesch was among the first to condemn Holder’s call, comparing him with Rep. Maxine Waters, D-California, who infamously told a crowd of supporters to harass Trump officials in public places.

Saying you’ll fact-check the media is spun as “violent rhetoric,” but it’s perfectly OK to call for bullying people in the streets (Maxine), increased incivility unless you have power (Hillary), or saying you’ll kick your opponents as Holder does here: https://t.co/hD6KrLDN49

1/2 Here’s another example of the deranged nature of the #Mobocrats.

I would like to see Eric Holder attempt to kick a Republican..something tells me it wouldn’t go well for Eric.

“We do not ‘kick’ those with whom we disagree. Instead, we work hard to win elections and support President Trump’s agenda – one that reflects the same respect for opportunity and liberty for all,” she wrote.

The bitter fight over Justice Brett Kavanaugh’s confirmation to the Supreme Court saw protesters pounding the doors of the Supreme Court, bringing mayhem to the Senate gallery. A group of angry protesters forced Sen. Ted Cruz (R-Texas) to leave a restaurant, while Arizona Senator Jeff Flake was cornered in an elevator by anti-Kavanaugh protesters.

Tension in US politics has been building since the election of Donald Trump in 2016. September marked a year since House Majority Whip Steve Scalise was shot by a gunman at a congressional basketball game.

Most recently, it was reported that a Trump supporter’s car was torched in a club parking lot in Washington because it had pro-Trump stickers on it.