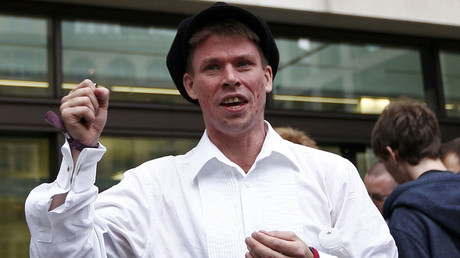 British lawmakers are calling on US President Barack Obama to halt the extradition of Lauri Love, an autistic computer hacker, who faces up to 99 years in prison for illegally accessing US government networks.

If extradited, the 31-year-old will be the first UK-based computer hacker to be sent to the US for prosecution.

Love, from Suffolk in southern England, is accused of taking part in a string of protest hacking attacks on the US, including intercepting online systems operated by the Fed, NASA, the FBI, the US Department of Defense and the US Environmental Protection Agency, among others.

The US Department of Justice (DOJ) has pursued him with three extradition orders, claiming he and several collaborators violated millions of US networks between 2012 and 2013, landing US taxpayers with a multimillion-dollar damages bill.

Last month, District Judge Nina Tempia ruled Love should be extradited to the US, but gave him permission to appeal.

In their letter to Obama, MPs highlighted the fact Britain has prosecuted at least 12 people who have hacked US computer systems.

“Indeed, Mr Love would be the first UK-based computer hacker to be extradited and denied the opportunity to face a full prosecution in the UK,” they wrote.

“The UK criminal justice system is equipped to bring justice through sentencing and rehabilitating people who are adjudged to have committed these crimes. Many of these 12 cases did not involve individuals who have significant mental health issues, nor Asperger syndrome and were not at a high risk of suicide, yet they were not extradited.

“We would like to ask, why then is the United States insistent on Mr Love’s extradition despite the UK having a proven track record of appropriately sentencing and rehabilitating individuals who have committed computer-hacking offences against the US?”

Love and his family say a US prison sentence would cause his health to deteriorate and lead to a mental breakdown or suicide.

His case is reminiscent of British hacker Gary McKinnon, who narrowly avoided extradition to the US on mental health grounds.

McKinnon’s mother, Janis Sharp, warned last month Love would not survive prosecution in the US.

“I am worried he will be extradited and end up in an American prison … I worry that he won’t survive as American jails are terrible places. I just hope that Gary didn’t go through all of this for nothing,” she said.

McKinnon’s 10-year legal battle against US authorities came to an end in 2012 when his extradition was blocked by then-Home Secretary Theresa May because there was a “high risk of him ending his life.”