The Obama administration has announced its five-year plan for new oil and gas drilling leases in the Outer Continental Shelf. In a reversal of previous proposals, the final plan does not include drilling rights in the Arctic.

The final Five-Year Outer Continental Shelf (OCS) Oil and Gas Leasing Program makes available areas containing about 70 percent of economically recoverable resources in the OCS, the US Department of the Interior said Friday.

The final program, covering the years 2017 to 2022, includes 11 potential lease sales in four areas: 10 sales in three areas of the Gulf of Mexico currently not under moratorium, as well as one sale in the Cook Inlet area of Alaska.

“The plan focuses lease sales in the best places — those with the highest resource potential, lowest conflict, and established infrastructure — and removes regions that are simply not right to lease,” Interior Department Secretary Sally Jewell said.

Areas of the Arctic that were originally proposed to be up for sale in the five-year plan were dropped out of environmental concerns and lack of industry interest, the Interior Department said.

“After receiving extensive public input and analyzing the best available scientific data, the Beaufort and Chukchi Seas planning areas in the Arctic are not included in the Proposed Final Program.”

The decision means Arctic drilling is banned for the time being, as oil and gas companies have forfeited or let expire most leases in the area.

“Given the unique and challenging Arctic environment and industry’s declining interest in the area, foregoing lease sales in the Arctic is the right path forward,” Jewell said.

Thanks in part to local opposition, areas off both the Atlantic and Pacific coasts were not included in the five-year plan. 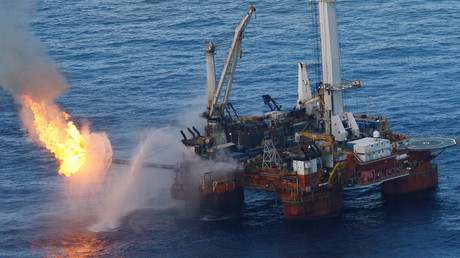 “The proposal makes available more than 70% of the economically recoverable resources, which is ample opportunity for oil and gas development to meet the nation’s energy needs,” said Bureau of Ocean Energy Management Director Abigail Hopper.

Trump could attempt to alter the five-year plan, but the regulatory process to do so could take years. In September, Trump said he would “make full use of our domestic energy sources,” though he never detailed an offshore-drilling plan.

Supporters of removing the Arctic from drilling leases had asked the Obama administration to enact stricter regulations in the Outer Continental Shelf Lands Act in order to permanently protect the area from drilling. That option was not included in the five-year plan, The Hill reported.

“For years, the Arctic Ocean has been left vulnerable to oil drilling that would devastate its pristine waters, Alaska Native villages, and coastal communities, and the marine life these communities depend on,” said Sierra Club Executive Director Michael Brune. “But thanks to the Obama administration’s leadership, the Arctic Ocean, like the Atlantic Ocean earlier this year, will remain protected from fossil fuel development.”