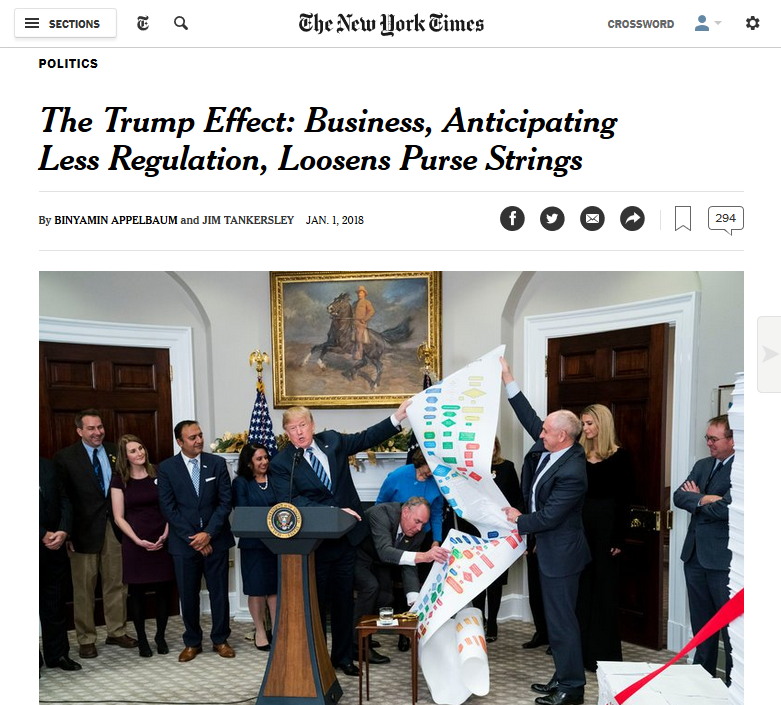 The New York Times (1/1/18) claims that “a wave of optimism has swept over American business leaders… inspired by the Trump administration’s regulatory pullback.” A closer look at the numbers suggests that the “inspiration” for increased business investments is mostly higher oil prices.

The New York Times (“The Trump Effect: Business, Anticipating Less Regulation, Loosens Purse Strings,” 1/1/18) had an article touting the fact that businesses are investing more under Donald Trump than before he was elected. It notes that non-residential investment has risen at an annual rate of 6.2 percent in the first three quarters of 2017. Reporters Binyamin Appelbaum and Jim Tankersley attribute this increase to a removal of regulations, leading to a newfound sense of confidence among investors.

There are two important points worth noting about this increase in investment. First, it is not an especially rapid rate of growth. There have been many periods in both the recent and more distant past when it grew at a more rapid pace.

The other important point about the growth of investment thus far during the Trump administration is the extent to which it has been concentrated in the mining sector. Investment, as measured in 2009 chained dollars, has risen by $102.0 billion from the fourth quarter of 2016 to the third quarter of 2017. Investment in mining exploration, shafts and wells has accounted for $39.8 billion of this increase, while mining and oil field machinery have accounted for another $4.4 billion.

In total, the mining and oil sector accounted for 43.3 percent of the rise in investment thus far in the Trump administration. This means investment in the rest of the economy has been a very lackluster 3.3 percent in spite of Trump’s promises to remove regulations. (Chained dollars are not strictly additive across sectors, but this calculation should be close to a more exact one, which would require applying nominal weights to each number.)

Furthermore, the investment in the mining and oil sector is almost certainly far more attributable to the rise in world oil prices than anything Trump has done in office. Oil prices collapsed in 2015 and 2016, falling from close to $100 a barrel in 2014 to a low of $32 a barrel last year. This slump led to a plunge in investment in oil and mining in 2016.

This year, oil prices have begun to rise again and recently topped $60 a barrel. Investment in oil and mining in the United States rose along with world oil prices, although current investment rates are still more than 30 percent below the peak of the Obama years.

In any case, if we think that Trump is responsible for the rise in world oil prices, then he can reasonably be given credit for the uptick in investment that has occurred during his administration; otherwise, there is not much for him to boast about.

For those folks who want to play with these numbers at home, real investment is available in the National Income and Product Accounts Table 5.3.6., Line 2. The data on mining structures is in the same table, Line 7. Data on mining and oil field machinery are in the underlying detail data, Table 5.5.6U., Line 39.