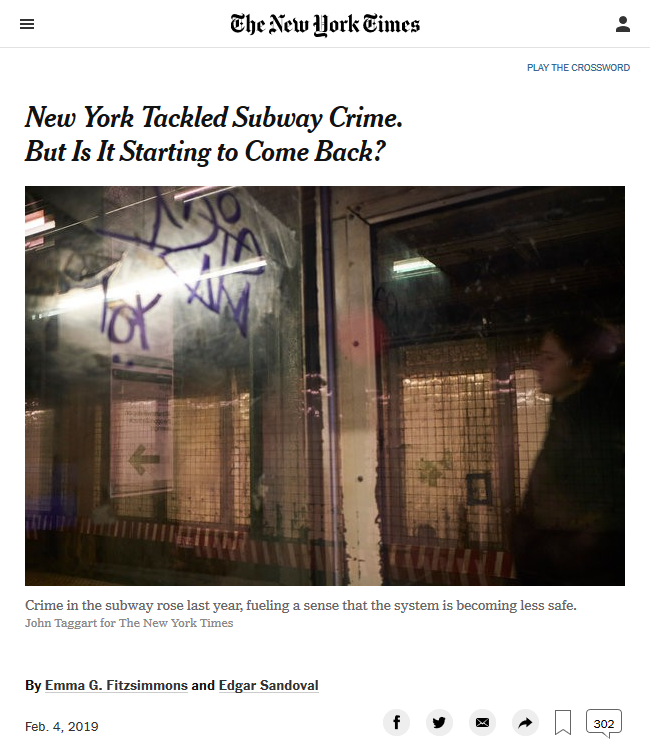 In recent months, most of the media coverage of New York’s subway system has been focused on the staggering cost to keep it in good working order and whether there’s a better way to run city transit. But Monday’s New York Times (2/4/19) introduced a new theme to the transit discussion: “New York Tackled Subway Crime. But Is It Starting to Come Back?”

The Times story began with several tales of recent assaults on the city’s subway system, including a man who was fatally shot in a fight on a platform on Sunday. Alongside vintage images of graffiti-bedecked trains, New Yorkers testified to their rising fears about being a victim on their daily commutes: Ana Smith, 62, of Brooklyn, said she does not let her 10-year-old grandson ride the subway alone. “I have to protect him,” Smith said. “It’s too dangerous. We have too much crime in this train station.”

It all added up to a worrisome indicator of the return of the bad old days of “Fear City,” as an infamous 1975 pamphlet issued by police unions dubbed New York. All, that is, except for a single chart included with the Times story: 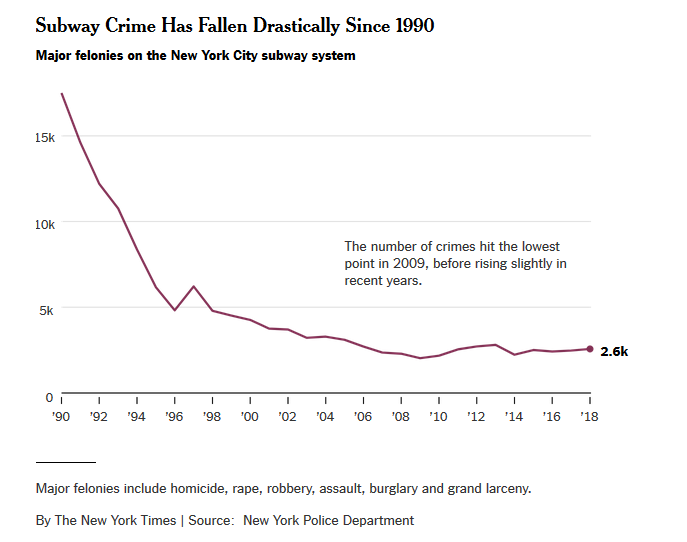 Subway crime, in fact, is dramatically down in New York’s subways, and remains near historic lows set in 2009. In fact, the Times article mentions this briefly, noting that last year’s 3.8 percent rise in crimes still left the subway far safer than historic rates, before moving on to claim that “recent concerns about safety have caused subway riders to once again change their behavior,” avoiding the train late at night or switching cars to avoid “menacing passengers” — though aside from Smith’s statement, the paper didn’t provide evidence that crime fears are having a significant impact on subway ridership. 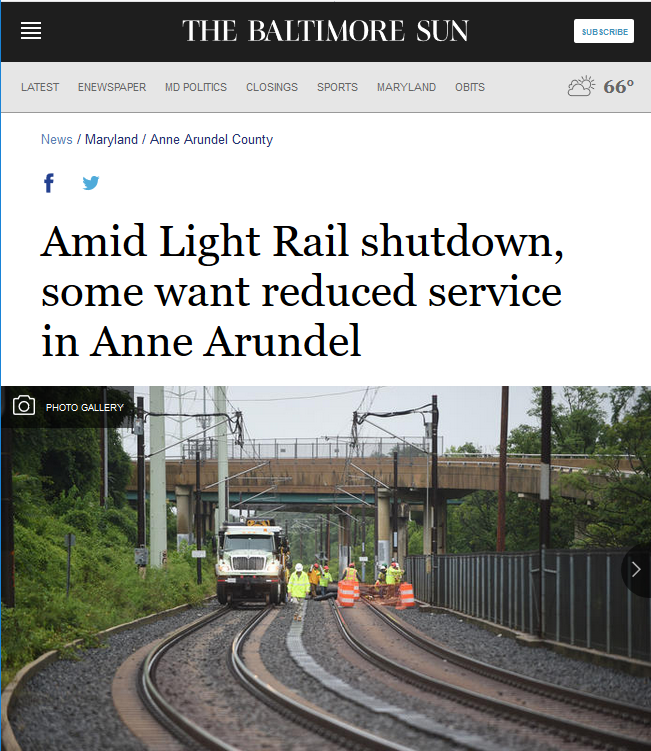 Inchoate fears about public transit—and the people who use it—have a long history, both in New York and other US cities. When flooding in Maryland led to the closure of several light rail lines for weeks, some local officials called for them to stay closed (Baltimore Sun, 7/24/18), with one decrying “drug addicts, crooks, thieves [who] go out there, rob the people, hop on the train back to Baltimore City.” (The Anne Arundel County police chief had previously assigned more officers to the rail system, noting that while statistics didn’t show any increase in crime, “there is a clear and convincing feeling of fear about it.”)

In the Atlanta metro area, fears of “unsavory people” making their way into the suburbs via mass transit led Gwinnett and Cobb county voters to repeatedly reject allowing the city’s MARTA transit system to expand into the city’s northern suburbs. The 1990 battle over MARTA expansion, in particular, was headline news across the country: The St. Louis Post-Dispatch ran an Associated Press story (11/4/90) that cited Gwinnett County Commissioner W.J. Dodd as saying of his constituents, “One of the worst fears is bringing people out of Atlanta, the minorities,” and gave it the neutral headline, “Atlanta Area Divided Over Rail Expansion.”

A front-page St. Petersburg Times article (10/25/90) on the pending vote cited letter writers to the Atlanta Journal-Constitution fearing that transit expansion would “bring people from downtown that we don’t need here” and “create a crime artery.” This reflected, the paper indicated, how “opposition for MARTA is rarely stated publicly as racial,” and yet instead focused on “the fear of crime.”

This careful parsing of even the most overtly race-based statements — if fear of crime is mentioned, it doesn’t count as a racial remark, even if it references “people from downtown” (the city of Atlanta was 67.1 percent black in 1990; Gwinnett County was 91 percent white) — has continued into the present day. As recently as last year, an Atlanta Journal-Constitution article (8/3/18) reported that few opponents “publicly expressed any racial bias,” instead focusing on “crime and wariness of the city of Atlanta”—immediately before listing public testimony against the transit plan that included a complaint about Atlanta’s “reputation for murder and rape — the wrong people,” and a MARTA rider who claimed to have once seen “three young black men riding who were polishing switchblades.” 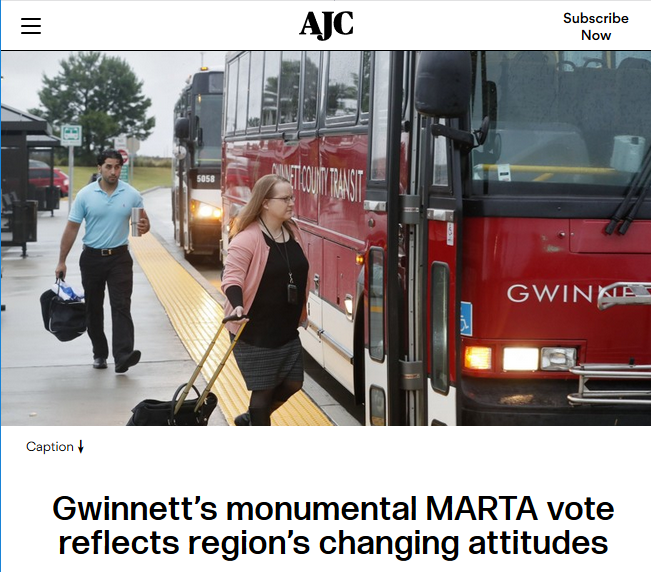 To the Atlanta Journal-Constitution (8/3/18), talking about Atlanta’s “reputation for murder and rape — the wrong people” is not an expression of racial bias.

In fact, fears of crime on public transit are often more about fears of particular types of people than about crime itself. Most famously, when Bernhard Goetz shot four teenagers on a New York subway train after claiming they’d asked him for five dollars, it was at the height of a gun violence epidemic in the city. Yet Goetz, who’d carried an unlicensed gun onto the subway and fired it multiple times in a car with 15 to 20 passengers on board, was hailed by the city’s tabloids with headlines reading “The Subway Avenger” and “Give Him a Medal.”

When Goetz was eventually acquitted of most charges — including reckless endangerment to other subway riders — the Times penned an editorial (6/18/87) that concluded with equanimity that “adopting stereotypes of fear is too easy,” reassuring readers that the verdict would not lead to increased police abuse against African-American New Yorkers, because “the New York police, under a black commissioner, are working to cope with discipline problems among rapidly recruited young officers.“

In fact, transit systems are one of the safer places to be: Less than one half of one percent of all violent crimes take place on public transit. Yet coverage of transit fears remains a local-journalism staple. After a Maryland commuter was assaulted by two young robbers on a DC Metro train in December 2015, leaving him with a broken jaw and collarbone and a concussion — one of more than 4,000 aggravated assaults in DC that year, 108 of which took place in the Metro system—the Washington Post  (1/9/16) set out to interview transit riders about their fears. Though the article noted that subway crime was up only slightly from historic lows the previous year, the headline cast this as “‘I’m Risking My Life’: Some Metro Riders Worry as Serious Crimes Rise.”

News coverage of crime on public transit, it turns out, is usually more about perception than reality. During the 1990 MARTA fight, when it was pointed out to Curtis McGill, a Gwinnett County commissioner who opposed transit expansion to his county, that studies had shown crime didn’t rise around new transit stations, he admitted such fears were overblown: “But it is the perception that people are focusing on.”

Likewise, shortly after the Goetz shooting, a New York Times editorial (1/4/85) noted that while subway crime was on the rise, “the absolute amount of serious subway crime is small — 38 reported felonies per day.” But, the Times continued, the “pervasiveness” of “mischief,” like graffiti and panhandling, “generates fear that a system millions must ride has slipped out of control,” and called for more police enforcement on the trains that would “take all that mischief as seriously as the 38 felonies.”

Several reporters and transit bloggers pushed back against Monday’s Times story, noting that stoking fears of subway crime at a time when it’s at historic lows was an odd way for a news outlet to report the news. But one of the article’s authors, Emma Fitzsimmons, defended the article’s tone on Twitter: “I think the perception is changing. Many of the fights and threats from passengers we see on the system aren’t reflected in the official stats.”

That would have been a much more honest headline for the Times: “Riders Perceive Subway As More Dangerous, Though Stats Show Otherwise.” But then, debunking racial fears rather than amplifying them has always been difficult for the US news media.