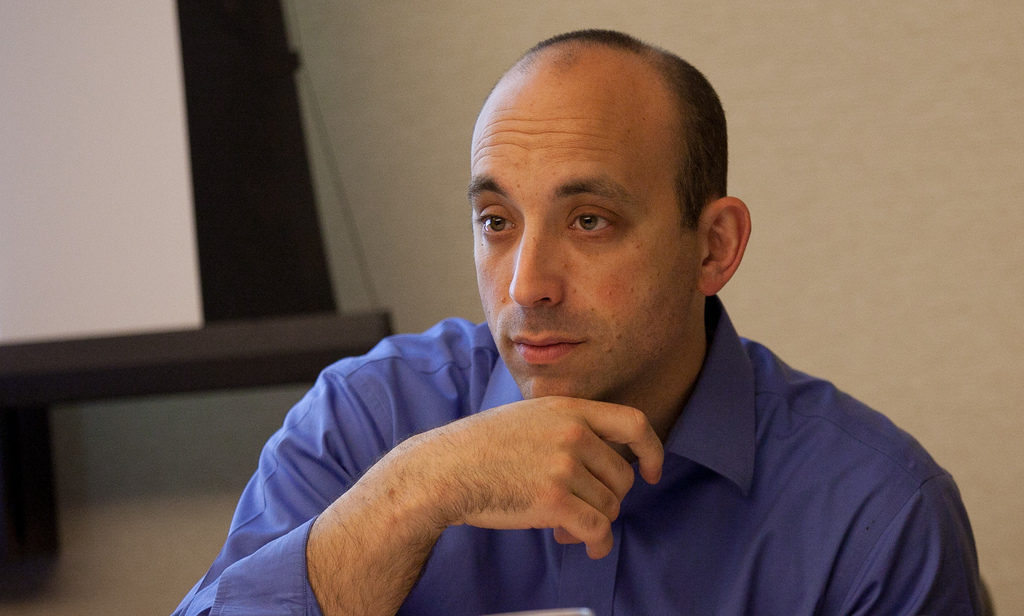 NPR‘s Morning Edition (3/15/19) turned for commentary on the Christchurch massacre to a source who couldn’t remember people ever being murdered in a mosque before. (cc photo of Jonathan Greenblatt by JD Lasica)

On NPR‘s Morning Edition (3/15/19), Jonathan Greenblatt, the director of the Anti-Defamation League, was interviewed by host David Greene about the mass murder of 49 people at two mosques in Christchurch, New Zealand. Asked by Greene “how common” it is for online hate speech to turn into a “mass shooting this terrible,” Greenblatt responded:

Well, I think this act of violence really doesn’t have a precedent as far as we know, murdering people in a mosque like this, and the social media dimension is something new. However, hate speech online is an increasing problem.

Greene didn’t react on the air to Greenblatt’s claim that there’s never been a mass murder in a mosque before. But of course, this is far from the first Islamophobic murder to take place in a mosque.

A little more than two years ago, on January 29, 2017, six people were killed by a gunman at the Islamic Cultural Centre of Quebec City in Canada. Last year, covering the sentencing of murderer Alexandre Bissonnette, the New York Times (5/5/18) reported that

more than a year after the Jan. 29, 2017, rampage, Canada is still grappling with Mr. Bissonnette’s crime. It shocked the nation and underlined the perils of Islamophobia and the far right in a country that prides itself on its multiculturalism and tolerance.

Similar to accounts of the Australian immigrant charged in the Christchurch murders, the Quebec City shooter was described by the Times as “drawn to far-right ideas, fueled by the election of Mr. Trump and fanned by fears that immigrants threatened Quebec’s identity.” 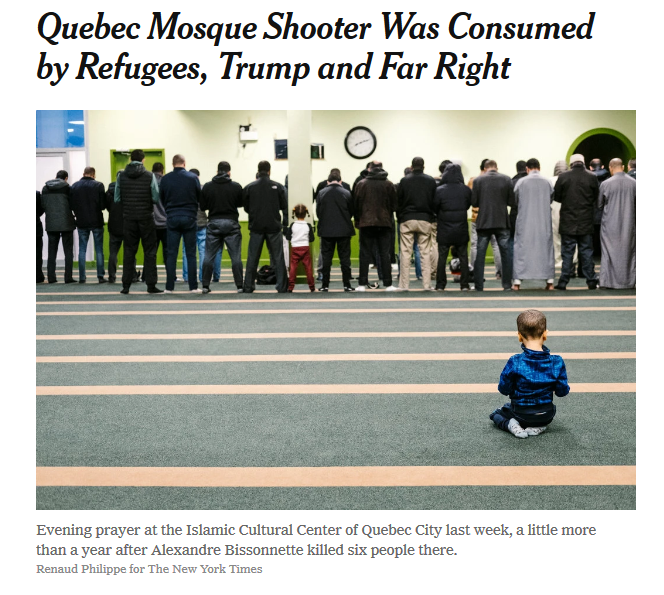 A year after a mass shooting at a Quebec City mosque, the New York Times (5/5/18) reported on how Quebec’s identity was shaken.

Another famous mosque attack—as Mondoweiss (3/15/19) pointed out in a post on the NPR interview—occurred in Hebron in the Occupied West Bank on February 25, 1994, in the Cave of the Patriarchs (Extra!, 5–6/94). Baruch Goldstein, a member of the Israeli army reserves, entered the site sacred to both Judaism and Islam and opened fire while Muslims were praying there, killing 29 before he himself was killed. This act of terrorism still casts a shadow over Israeli politics, as Haaretz (2/26/19) recently reported in an article about a Knesset debate over Goldstein’s burial place:

The killer’s grave has become over the years a pilgrimage site for extremist Jews who support him, and a shrine to his memory was set up next to his tomb.

Perhaps the biggest mosque-related mass murder occurred in the Philippines on September 24, 1974, when some 1,500 members of the Moro people were rounded up by the Philippine army and killed in a mosque in the village of Malisbong.

Other anti-Muslim mosque attacks include the 25 worshipers killed on October 11, 2017, at a mosque in Kembe, Central African Republic; the 20 people slaughtered at the Han Tha mosque in Taungoo, Myanmar, in May 2001; and the 147 victims of the Kattankudy mosque massacre in Sri Lanka on August 3, 1990.

Mosques have also been frequent targets of Islamic extremists, particularly Salafist militants such as ISIS attacking Shia and Sufi religious centers. The deadliest terrorist attack in Egyptian history took place on November 24, 2017, at the al-Rawda mosque in the Sinai Peninsula, when some 40 attackers, suspected of being affiliated with ISIS, killed 311 Sufi worshipers (New York Times, 12/1/17).

That none of this was recalled, either by the host of Morning Edition or the director of a group that presents itself as a “global leader in exposing extremism” with a mission “to secure justice and fair treatment for all,” is a testament to the failure of our information systems to give due weight to violence against Muslims—and the consequent dangerous impoverishment of our collective memory.