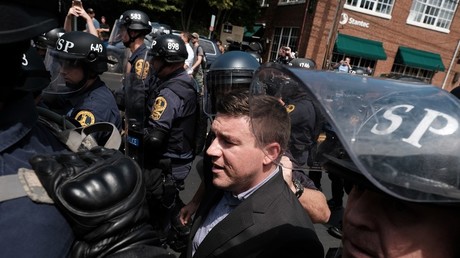 National Public Radio is facing a storm of criticism from left-leaning journalists after airing an interview with Charlotesville rally organizer Jason Kessler, not so much over what he said but that he got to speak at all.

An interview with Kessler, which ran just under seven minutes, was aired Friday on NPR’s Morning Edition. Within hours, it was angrily denounced by ThinkProgress, which accused NPR of giving Kessler a platform to “peddle junk ‘race science’” and of “implying” moral equivalence by following it up with an interview with a Black Lives Matter activist.

That NPR interview with Unite the Right organizer Jason Kessler is bad and everyone involved should feel bad.

Huge mistake putting Jason Kessler in the air with a reporter unable/unwilling to challenge him. He got millions in free ad time to promote his hate thanks to you. Don’t call me for donations this fall @NPRhttps://t.co/skW0WxLBkA

we already know what jason kessler thinks. we’ve heard his words. more importantly, we’ve seen the consequences of his actions.
we’re so far past needing to hear “both sides” of this narrative.
this isn’t journalism. it’s active support of a violent white supremacist agenda. https://t.co/eQ0StufigU

Up this morning and aghast to hear @NPR giving white supremecist jason kessler a platform to spew hate and bullshit, and even worse, to hear him presented as a “both sides” against the #BlackLivesMatters movement. How dare they.

Cannot believe this @NPR interview with Jason Kessler, the organizer of the Unite The Right rally— the interviewer is allowing Kessler to spew his propaganda, virtually unchallenged.

Jason Kessler being given an interview on NPR as if white supremacy is a legitimate policy position is a reminder that many of the (white) people making decisions in the media don’t feel impacted by any of this — it’s either entertainment or “news” until it hits their doorstep.

Responding to the criticism, Noel King, who conducted the interview, argued that she is biracial, her producer is black, and the Morning Edition team is “notably diverse.”

I’m a biracial woman. Our Executive Producer is a Black woman. I understand you didn’t like this interview; I understand why, but Morning Edition is a notably diverse team who thought long and hard before airing this. If you’re at @NABJ next year, I’d love to meet you in person.

King did receive a compliment or two for her handling of Kessler.

@NoelKing did an amazing job on this interview with Jason Kessler. Best part (around 2:45): she rattled off some of the Nazis he invited to speak. He became indignant and accused her of going off of “left-wing rumor mills.”

At one point, she asked Kessler for an example of racial differences, and he responded by citing IQ rankings.

“There is enormous variation between individuals, but the IQ testing is pretty clear that it seems like Ashkenazi Jews rate the highest in intelligence, then Asians, then white people, then, uh, Hispanic people and black people,” Kessler said.

King reacted by dismissing the work of Charles Murray, the scientist Kessler referenced, as “debunked” and “deemed racist by many.”

For most critics, however, that was not good enough – nor was prefacing what Kessler said with “some of what you’re about to hear is racist and offensive.” That Kessler was allowed to speak at all was unpardonable.

NPR stepped in it w/the Jason Kessler intv. I understand wanting to give people an opportunity to hear for themselves what ideas “Unite The Right” promotes. But a disclaimer that “some of what you’re about to hear is racist” doesn’t do enough to check the 6-ish mins that follow.

All the NPR folks closing ranks in the wake of their shit reporting on Jason Kessler, talking about we need to understand the threat to combat it.

Who is “we”? And if you do not understand it by now, that’s on you. Go figure it out in silence. Stop platforming them ffs.

Kessler, who was involved in Occupy Wall Street protests in 2011, gained notoriety in August last year when he organized a “Unite the Right” rally in Charlottesville, Virginia. Police failed to separate the rally-goers and counter-protesters, leading to clashes in which dozens were injured. Later in the day, one of the rally-goers drove his car into the crowd of counter-protesters, killing 32-year-old Heather Heyer and injuring 19 others. He has been charged with a hate crime.

Kessler’s application for another rally in Charlottesville was denied, but he was granted a permit for a protest outside the White House on Sunday.