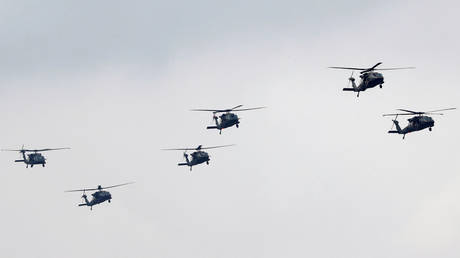 Dozens of Black Hawk helicopters descended on downtown Los Angeles Monday night while residents reported explosions and scrambled to find out if they were looking at a military invasion or a film shoot.

The sinister flock of military birds hovered and zoomed through the high-rise canyons of downtown, accompanied by strange explosions and military maneuvers – and zero explanation from the authorities as to what was going on for what must have seemed like hours.

At least one helicopter actually landed on Wiltshire Boulevard in downtown LA, and explosions were heard all over the city.

The LA Police Department belatedly released a statement assuring Angelenos that it was only a drill, explaining “members of the US Army” had cleared the “military training” with local police and officials.

“The purpose of the training is to enhance soldier skills by operating in various urban environments and settings,” the LAPD wrote, stressing that “safety precautions” were in place to prevent “unnecessary risk to both participants and/or area residents and property.”

It hit the TV news who reported that it was an unanounced exercise to keep the troops sharp.
Want to believe; but very strange; more like a rehearsal for Martial Law. Consider DT’s threat of declaring National Emerg; only one step away from….

While local news reportedly called the operation an “unannounced exercise to keep the troops sharp,” the LAPD claimed “citizens in close proximity to the areas where the training will take place will be notified prior to the training.”

This happened right outside my windows. Multiple helicopters & explosions, and men w/ guns storming the building next door. Wilshire blocked and we couldn’t leave for nearly an hour without warning. It was loud, scary stuff. Truly baffling no effort was made to warn in advance.

Hey @MayorOfLA – you want to do military exercises in #dtla? Cool man, just Warn Us. You got a generation of post-9/11 folks frantically refreshing to find out if there’s a need for us to book it out of town.

Yet they apparently didn’t notify everyone, as locals took to Twitter in varying states of terror to try to find out what was happening.

While everyone was looking at the helicopters, a P-8A Poseidon circled the city for hours. The high-powered surveillance craft, known as a “submarine killer,” set tongues wagging.

Oh gosh, are we about to have a false flag event in LA?

Preparations for civil unrest? Would be interesting to see if they were practicing over any predominantly Republican/conservative areas.

The military exercise, which reportedly involved Special Forces, will continue through Saturday. While the choice of downtown Los Angeles is supposed to “simulate urban environments the service members may encounter when deployed overseas,” more than a few worried they were training for a mission closer to home.

Or a pre SOTU false flag attack to delay SOTU.