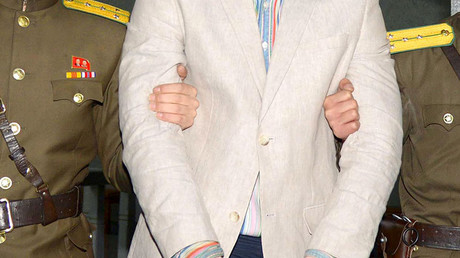 A BBC crew is being expelled from North Korea after being detained over what the self-isolated state’s leadership called “distorted” reporting that spoke “ill of the system.”

Correspondent Rupert Wingfield-Hayes, his producer and cameraman were held in detention over the weekend but have since been taken to the airport, the BBC says.

The crew was in Pyongyang ahead of the Workers’ Party Congress, accompanying a delegation of Nobel Prize laureates who were on a research trip.

He told Radio 4’s Today program that the crew was waiting to board a flight when Wingfield-Hayes was held back, taken to a hotel and questioned for eight hours.

Evans says Wingfield-Hayes was told to sign a “confession,” confirming his work had been inaccurate in his reporting of two incidents, including questioning the authenticity of a children’s hospital.

In his report on the hospital visit, Wingfield-Hayes said the patients looked “remarkably well,” that there was no real doctor on duty and that everything he saw looked like a “set-up.”

North Korea’s National Peace Committee secretary general, O Ryong-il, says news coverage by Wingfield-Hayes “distorted facts and realities” and “spoke ill of the system and the leadership of the country.”

He says Wingfield-Hayes wrote an apology and would never be admitted into the country again.

More than 100 foreign journalists are in the capital for the North Korea’s first party congress in 36 years, though they have been prevented from covering proceedings.