North Carolina has ended the practice of shackling of women prisoners while they are giving birth. The US state joins only 18 others that regulate the practice, according to civil rights groups.

State Prisons Director Kenneth Lassiter announced this week that restraints must be removed once an inmate is in labour unless she is a threat to herself or others or she poses an escape risk. Last year, 81 inmates gave birth while imprisoned in North Carolina.

The policy still allows a pregnant inmate to be handcuffed while being transported but the use of leg or waist restraints will end.

Eighteen US states in total have laws that regulate or prohibit shackling pregnant women while giving birth. However, eight states have no laws concerning the shackling of women who are giving birth at all. This means prisons can impose restraints, such as leg irons and handcuffs, on a woman at any point while she’s giving birth. 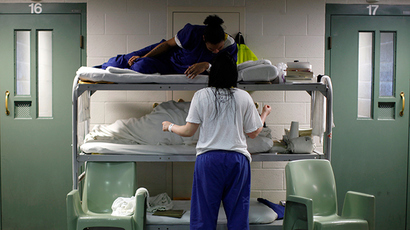 The use of shackles on women giving birth is highly controversial. Prisons argue that it is necessary in some cases to avoid escape attempts.  The American Medical Association (AMA) has described it as “a barbaric practice that needlessly inflicts excruciating pain and humiliation.”

The practice is “detrimental to the health of the mother and her newborn child.” the ACLU said, citing medical risks.

Thirty-one states do not have a policy that holds institutions accountable for shackling pregnant women without adequate justification, according to research cited by the AMA.

The policy change in North Carolina follows a press statement released by a coalition of advocacy groups, which called on the North Carolina Department of Public Safety to respond to the treatment of two unnamed inmates who were allegedly forced to deliver their babies while shackled.

“It is an important first step to ensuring the health, rights and dignity of people who are incarcerated.” Omisade Burney-Scott from SisterSong, one of the groups involved in the campaign, told RT after the announcement.

The US incarcerates more women per capita than any other country. In 2015, there were 210,000 women jailed in America, but there is little information about how their reproductive status, according to the Pregnancy in Prison Statistics (PIPS) project.