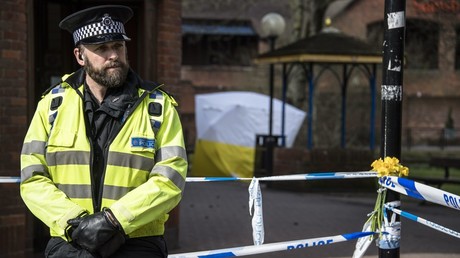 Politicians’ words must not be taken at face value as trust in them has eroded, George Galloway has said, as he hit out at the UK for failing to produce evidence to the public of Russia’s alleged involvement in the Skripal case.

As the US and other countries expel scores of Russian diplomats to back Prime Minister Theresa May’s sanctioning of Moscow over its alleged “culpability” in the poisoning of former double agent Sergei Skripal and his daughter Yulia, former Labour MP Galloway told RT that they are doing so without a “slither of evidence.”

“Nobody knows who is guilty. No one has been shown a scintilla, a slither of evidence showing who did this or even what it was that happened. Both of these are open questions and none of us have been given any evidence, and all of us are being asked to take on trust the word of a British PM on an issue of chemical weapons.”

None of the countries which have joined May in her condemnation of Russia are basing their allegations on facts, according to Galloway. “None of them are going by evidence. All of them are going by the false assertion that the weapon that was used against these two individuals in Salisbury was a Russian weapon made in Russia, produced illegally in Russia and delivered by someone working for Russia. There is not a slither of evidence for any of that and in truth anyone who states it is lying.”

READ MORE: ‘We don’t even know where he is’: Sergei Skripal’s Russian family speak out

The one-time MP went on to say that there is no proof of British people wanting “blood” or confrontation with Russia. “It [the Skripal case] is being made a casus belli by the British government which for a hundred years has harbored ill feelings and sometimes hatred for Russia.”

He concluded saying the Organization for the Prohibition of Chemical Weapons (OPCW), which is currently examining samples of the nerve agent used against the Skripals, will “presumably be lent upon to obfuscate the outcome. No one will ever know the truth.”