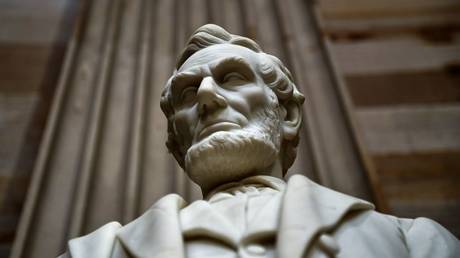 Not since Abraham Lincoln has a US president been treated so badly by the media, Donald Trump lamented in a series of Twitter rants before going to Delaware to honor the four Americans killed in Syria.

“Will be leaving for Dover to be with the families of four very special people who lost their lives in service to our Country,” Trump wrote on Twitter on Saturday.

Two US troops, a civilian and a contractor were killed in a suicide bombing in the Kurdish-controlled northern Syrian city of Manbij on Wednesday. But the president had no intention to focus on his surprise visit to Dower Airforce Base in Delaware for too long.

His next Twitter post was dedicated to a completely different subject, as Trump cited former House Speaker, Newt Gingrich, who – according to him – said: “There has been no president since Abraham Lincoln who has been treated worse or more unfairly by the media than your favorite President, me!”

At the same time, he insisted that “there has been no president who has accomplished more in his first two years in office!”

Trump’s invocation of Lincoln prompted reactions from his supporters and opponents.

Lincoln must be rolling in his grave. “All the hard work I did to keep the United States together, and Trump does what?!”

Trump said that the US economy was “one of the best in our history” due to his policies and warned his rivals against impeaching him as it will cause a “crash” of the stock markets.

The president went on, raging about a fresh BuzzFeed report, which claimed that he ordered his former lawyer, Michael Cohen, to lie to the Congress about the talks on the Trump Tower project in Moscow in 2016. Special Counsel Robert Mueller, who heads the Russian collusion probe, dismissed the BuzzFeed claims as “not accurate,” in an unprecedented comment on the news story.


The barrage of tweets concluded with one dedicated to his dispute with the Democrats over the construction of the wall on the Mexican border, which provoked the longest 29-day government shutdown in US history.

Mexico is doing NOTHING to stop the Caravan which is now fully formed and heading to the United States. We stopped the last two – many are still in Mexico but can’t get through our Wall, but it takes a lot of Border Agents if there is no Wall. Not easy!

Trump wants $5.6 billion and no less for the project, which was his campaign promise, while the Democrats don’t seem willing to budge, as almost a million federal workers missing their paychecks.