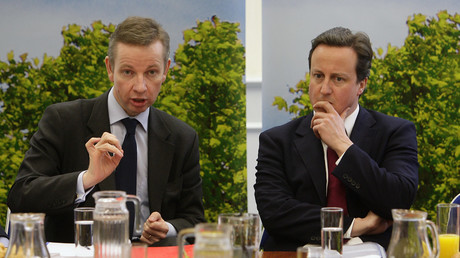 Revelations from Tory peer Baroness Warsi that Michael Gove unduly influenced former UK PM David Cameron, by shifting the government’s attitude towards Muslims with his “extreme views,” has been met with media silence.

Business Insider, revealed claims by Warsi, who served in David Cameron’s Cabinet as Minister without Portfolio, that the “UKipfication” of the Tory party had in large part been instigated by the current Environment Secretary Michael Gove.

She goes further by insisting it was Gove’s “extreme views” on Islam that created the Tories’ unhealthy attitude towards Muslims, making the most of his close relationship with Cameron to force a change in tact.

Going on to say: “In private conversations [I know that David] had some concerns about some of the extreme views that Michael had but over time [Gove] influenced a lot of his views.”

There has been little reaction from the British media since Warsi – who quit as Foreign Office minister in 2014 due to the UK government’s policy on the crisis in Gaza, labeling it “morally indefensible” – spoke out against the “poison” of Islamophobia which she thinks has now affected all levels of the party.

The accusations have, at the time of publication, only received several write ups with just one major publication issuing a reaction piece and next to no broadcast media coverage on Warsi’s claims. To date, only five articles have been written, including from left-wing news outlet, Evolve politics, with The Mirror the only traditional newspaper to write on the story.

It’s been left to social media users on Twitter to express dismay at the lack of coverage of such an important issue that reflects badly on the governing party. Left-wing journalist and author, Paul Mason tweeted: “Cue a wall to wall BBC/tabloid frenzy at revelations that Gove and co are “extreme” racists against Muslims? Nope.”

Cue a wall to wall BBC/tabloid frenzy at revelations that Gove and co are “extreme” racists against Muslims? Nope. https://t.co/8UwhkhJK7g

Extraordinarily, not a word about it on @BBCNews

This is extraordinary. The former Tory co-chair says Michael Gove has “extreme views” on Muslims & is responsible for the “Ukipification” of the party, in which the “poison” of Islamophobia” exists “all the way up to the top”. Why isn’t this on the news? https://t.co/JrUW4Rk8Hb

It’s not the first time Warsi has spoken out against Tory Islamophobia. However, she has gone further than before with the latest remarks, claiming the problem goes right “up to the top” of the Conservative party.

“It’s very widespread [in the Conservative party]. It exists right from the grassroots, all the way up to the top. I don’t think it’s something that Theresa is a part of, but I do believe it is something the leadership feels can be easily ignored,” she claimed.

However, Warsi said that the Tory leadership was comfortable with tolerating Islamophobia in the party because “they don’t think it is going to damage them because that community doesn’t vote for them in any great numbers.”

She added: “I think that there is a general sense in the country that Muslims are fair game and it is not the kind of community where you can treat really badly and have many consequences. You can get any with it.”

One has to ask, would Labour under the leadership of Jeremy Corbyn have been able to escape widespread media condemnation if their answer to accusations of anti-Semitism had been, ‘why does it matter, the Jewish community don’t vote for us in great numbers anyway’?

There certainly seems to be a startling difference in the extent of the media coverage between Labour’s anti-Semitism “crisis” and the Tories’ Islamophobia story. Contrived or is the British media too distracted by Brexit?