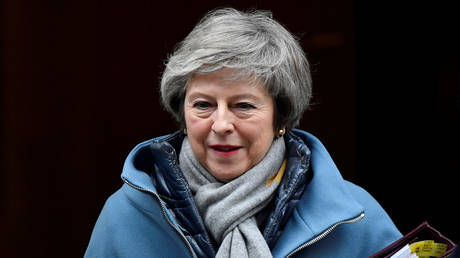 British Prime Minister Theresa May is to appeal for the Brexit deal on Monday, arguing it is MPs’ duty to split with the EU. Her cabinet is facing a no-confidence vote after an expected defeat of the deal on Tuesday.

May is to deliver two speeches on Monday in a last-ditch effort to convince legislators to support the deal her government negotiated with the EU on the terms of Britain’s divorce with the Union. One is to be delivered to workers of the leave-supporting city of Stoke-on-Trent in central England. Another one will come at the Parliament, which is scheduled to vote on Tuesday on whether to accept the Brexit deal, but is expected to turn down May’s plan.

In her speech to the workers, May is set to describe what essentially amounts to a parliamentary coup, which would undermine the will of the British people expressed in the 2016 Brexit referendum.


“As we have seen over the last few weeks, there are some in Westminster who would wish to delay or even stop Brexit and who will use every device available to them to do so,” May is to say, according to advance extracts. “I ask MPs to consider the consequences of their actions on the faith of the British people in our democracy.”

During the Tuesday vote, some 100 MPs of May’s own party as well as 10 legislators from the Democratic Unionist Party, a Northern Irish partner in her minority coalition, are expected to vote against the deal, joining the opposition. The Labour Party’s leader Jeremy Corbyn is expected to file a motion of no confidence sometime after the vote, potentially leading to a new general election.

Britain has until March 29 to endorse an orderly exit from the EU and is facing a so-called “hard Brexit” as an alternative. This scenario is likely to cause significant damage to the national economy.

As part of the effort to smooth things before the Tuesday vote, the EU and the British government are to exchange letters on Monday, meant to alleviate some of the concerns. The issue of border control between the Republic of Ireland and UK’s Northern Ireland remains the biggest point of contention.