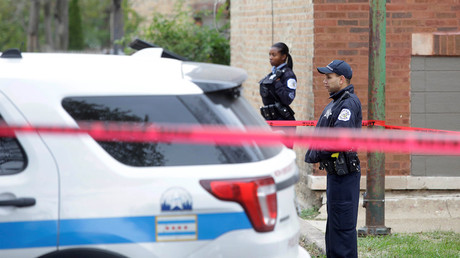 New Year’s Eve turned into a bloodbath for a family in New Jersey after a 16-year-old teen shot dead his parents, sister and a family friend. Neighbors and friends say the boy was reportedly autistic and was home-schooled.

Police in Long Branch, New Jersey responded to an emergency call shortly before midnight New Year’s Eve, Monmouth County Prosecutor’s Office said in a statement on Monday. When they arrived, they discovered four bodies inside the multi-family home.

The suspect, identified by local media as 16-year-old Scott Kologi, was taken into custody. He reportedly used a Century Arms “semi-automatic assault rifle” to gun down his family, the prosecutor’s office added. It appears that the victims were his father Steven Kologi, 44; mother Linda Kologi, 42; sister Brittany Kologi, 18; and family acquaintance, Mary Schultz, 70. The rifle was legally owned by the family, WPIX reported.

“We are confident that this is a domestic incident that is completely isolated. It’s a terribly tragic incident,” Monmouth County Prosecutor Christopher J. Gramiccioni said.

The gunman’s brother, Steven Kologi Jr. and their grandfather, Adrian Kologi, were also in the house at the time of the incident but were unharmed, officials said, as cited by New York Daily news.

It later emerged in the media that the teenager may have mental-health problems and is probably autistic. Veronica Mass, whose daughter grew up with Linda Kologi, told NY Daily News that Scott had educational disabilities. “He wasn’t getting along with the other kids. The kids were making fun of him because he couldn’t read,” she said.