It’s not uncommon to read news stories that quite explicitly identify economic mismanagement. For example, news reports on the hyperinflation in Zimbabwe routinely (and correctly) attribute the cause to the poor economic management by its leaders. We will see similar attributions of mismanagement to a wide range of developing countries.

One place we will never see the term mismanagement or any equivalent term applied is in reference to the austerity imposed on the euro zone countries by the European Commission, acting largely at the direction of the German government. In fact, major news outlets, like the New York Times, seem to go out of their way to deny the incredible harm done to euro zone economies, and to the lives of tens of millions of people in these countries, as a result of needless austerity.

A decade ago, it would at least have been an arguable point as to whether austerity, meaning budget cuts, in the wake of the Great Recession, was reasonable policy. There was some research suggesting that the boost to confidence from lower budget deficits could spur enough investment and consumption to offset the impact on demand of reductions in government spending.

Since then, however, we have far more evidence on the impact of deficit reduction in the context of an economy coming out of recession. There have been numerous studies, most importantly several from the International Monetary Fund’s research department, which show that lower deficits in this context slow growth and raise unemployment.

Furthermore, they show that periods of high unemployment have a lasting impact as a result of workers losing skills, and companies and governments in a downturn foregoing investment that they would have undertaken if the economy were closer to its potential level of output. This means that insistence on deficit reduction not only led to one-time drops in output and employment, but could reduce potential output by trillions of dollars over subsequent years.

At this point, the advocates of fiscal austerity, in the context of economies that are operating well below potential GDP, are ignoring a large body of evidence in favor of personal prejudices. These people should be viewed like global warming deniers or creationists. They are not credible people, and their policies have inflicted enormous damage where they have been put in place. 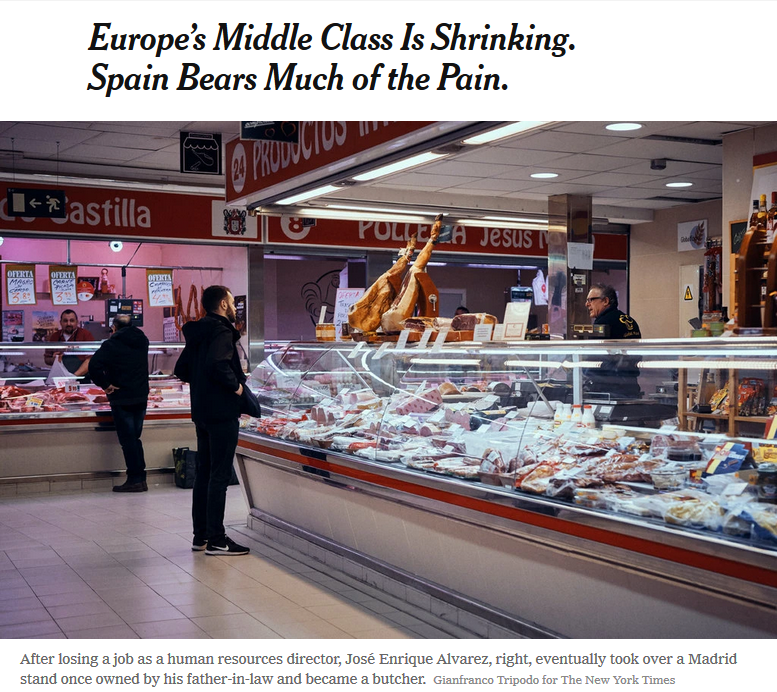 The New York Times (2/14/19) reports that seems that the shrinking of the middle class “should not be happening” in Spain, because “the country was feted by European policymakers as a model for the recovery, having tightened its belt to exit a deep recession.”

Incredibly, instead of pointing out that the advocates of austerity have been shown wrong, most reporting continues to treat their policies as being credible, and in fact often works to hide evidence of its failure. The New York Times (2/14/19) gave us a great example of this practice in an article on the decline of the middle class across Europe, with a focus on Spain.

Spain has been especially hard hit by the demands for austerity. In contrast to Greece and Italy, Spain had actually been running budget surpluses in the years leading up to the crisis. Its debt to GDP ratio was just 22.3 percent when the crisis hit, less than half of Germany’s, so there was no story of profligate government spending.

What Spain did have was a massive housing bubble, fueled largely by German banks, who apparently were not very good at their business. When the bubbles burst in Spain and elsewhere, the economy in Spain was especially hard hit, with the unemployment rate crossing 26 percent in 2013. While the unemployment rate has come down in the last five years, the number of people employed is still more than 1 million less than before the crisis.

Spain is a country that could have benefited enormously from a large-scale stimulus program, both domestically and the across the eurozone, since much of its GDP is exported. Instead, the great minds in charge of the euro zone’s economic policy insisted that Spain had to reduce its budget deficits to comply with the euro’s rules.

Given this history, the cause of the decline of the middle class in Spain seems about as clear as the causes of a person’s mobility problems after they have been run over by a truck. Instead, the New York Times made it all seem very mysterious, telling readers:

Spain’s economy, like the rest of Europe’s, is growing faster than before the 2008 financial crisis and creating jobs. But the work they could find pays a fraction of the combined 80,000-euro annual income they once earned. By summer, they figure they will no longer be able to pay their mortgage. [The “they” refers to a formerly middle-class couple who lost jobs in the downturn, and had to find new jobs at far lower pay.]

It is a precarious situation felt by millions of Europeans.

Since the recession of the late 2000s, the middle class has shrunk in over two-thirds of the European Union, echoing a similar decline in the United States and reversing two decades of expansion. While middle-class households are more prevalent in Europe than in the United States — around 60 percent, compared with just over 50 percent in America — they face unprecedented levels of vulnerability….

The hurdles to keeping their status, or recovering lost ground, are higher, given post-recession labor dynamics. The loss of middle-income jobs, weakened social protections and skill mismatches have reduced economic mobility and widened income inequality. Automation and globalization are deepening the divides.

Just about every part of this story is wrong. Spain and most other European countries are not growing faster than before the recession. According to the IMF, Spain’s economy grew at a 2.7 percent rate in 2018 and is projected to grow 2.2 percent this year. By comparison, it grew at an average rate of more than 3.9 percent in 2006 and 2007, the last two years before the recession.

But more importantly, the immediately relevant factor is cumulative growth, not a single year. As a result of its sharp downturn and weak recovery, Spain’s per capita GDP was just 3.0 percent higher in 2018 than it was in 2007. By comparison, coming out of the Great Depression in the United States, per capita income in 1940 was more than 8.0 percent higher than in 1929.

Given these basic growth numbers, it would be surprising if Spain’s middle class had not taken a big hit. While other factors, like the weakening of labor market protections, have made its plight worse, the dismal story on growth goes a very long way in explaining the decline in Spain and Europe’s middle class. 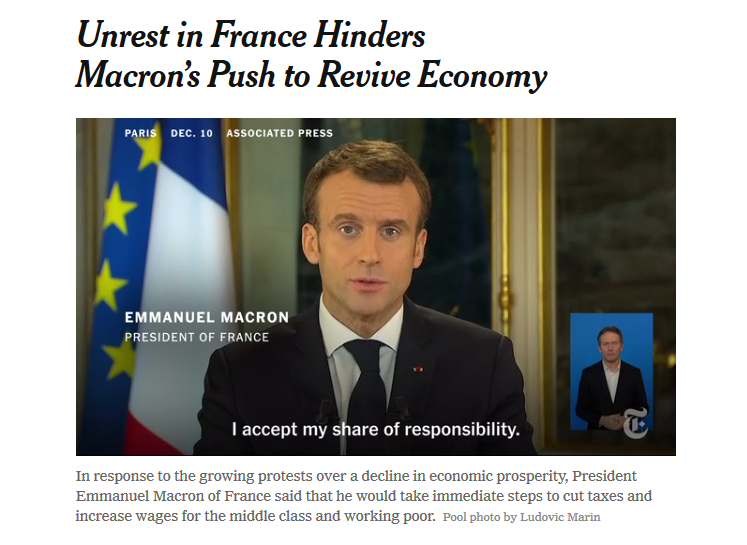 In the New York Times‘ framing (12/11/18), increasing the income of workers is at odds with a “push to revive economy.”

Unfortunately, this sort of story in the New York Times is not an exception. The paper has repeatedly told readers that policies that undermined the welfare state and redistributed money upward, were being done for the purpose of revitalizing the economy. This was especially the case with Emanuel Macron in France (here, here and here). In these and other cases, the media took at face value the claims of politicians that the reason for the measures was to help workers, not to reduce their bargaining power, which is their immediate effect.

To be clear, labor market regulations can be excessive, and there are certainly contexts in which streamlining them would end up benefiting most of the labor force, even if such streamlining could hurt narrow groups of workers. But the idea that excessive labor market regulation, rather than inept macroeconomic policy, is the main problem limiting growth and reducing employment in France, Spain and elsewhere in Europe does not have any evidence to support it.

David Howell, Andrew Glyn, John Schmitt and I did a study showing the limited impact of labor market protections on employment more than a decade ago. Based on our work, the OECD did its own analysis, and reached similar conclusions.

In short, the New York Times and other media outlets have been engaged in a great exercise in misdirection. While the blame for Europe’s economic problems over the last decade can very clearly be laid at the doorstep of its leaders who have insisted on austerity, the media consistently ignore evidence that is as clear as day. They instead treat the problems facing Europe’s workers as being mysterious in origin, or due primarily to an overly generous welfare state and excessive regulations that protect workers. This is some seriously biased and/or misinformed reporting.