Audience strategy editor for NYT Nick Dudich placed a negative report about Facebook in a spot where he knew it wouldn’t draw much attention, while bragging about using his Silicon Valley friendships to make videos trend, according to a new undercover video.

“We actually just did a video about Facebook negatively, and I chose to put it in a spot that I knew wouldn’t do well,” Dudich said in a secretly filmed conversation with someone from the conservative organization Project Veritas.

Dudich claimed that his friends in Silicon Valley helped Times videos trend, while saying he doesn’t want the Times to know about his connections, according to Project Veritas.

“Let’s say something ends up on the YouTube front page, New York Times freaks out about it, but they don’t know it’s just because my friends curate the front page. So, it’s like, a little bit of mystery you need in any type of job to make it look like what you do is harder than what it is,” Dudich says in the recording. 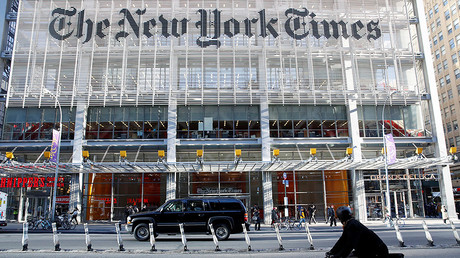 The Project also secretly filmed Earnest Pettie, the Brand and Diversity Curation Lead at YouTube, who explains how YouTube so-called news carousel is formed: “At the very least, we can say this shelf of videos from news partners is legitimate news because we know that these are legitimate news organizations.”

In the recording Pettie also says Dudich is “one of the people I think who has more knowledge about YouTube as a platform than probably anyone else that I know.”

The video released Wednesday is the latest of Project Veritas’ series called “American Pravda,” aimed at the US mainstream media. The installment released Tuesday also featured recordings of Dudich, in which he claims he worked for Hillary Clinton’s presidential campaign to counter the “threat” of Trump and that he did not join the Times to “be objective.”

It is impossible to assess the credibility of Dudich’s claims, however, as he also claimed that former FBI Director James Comey was his godfather, and that he used to participate in Antifa activities on behalf of the FBI.

Dudich admitted this was not true after Project Veritas interviewed his father, who said he didn’t even know Comey. It was “a good story,” Dudich said when asked why he lied.

In response to the Tuesday video, a New York Times spokeswoman Danielle Rhoades Ha said that Dudich was a “recent hire in a junior position” who “appears” to have violated the newspaper’s “ethical standards and misrepresented his role.”

James O’Keefe, who founded Project Veritas in 2010, has released a number of controversial undercover videos, including one with CNN political commentator Van Jones this summer. Jones accused O’Keefe of editing the video in such a way that took his words out of context and created a “hoax.”

In the Veritas video Jones was recorded saying the investigation into Russia’s alleged meddling in the 2016 election was “a big nothing-burger.” Jones said the missing context was that he said Democrats couldn’t use it to impeach Trump, even if the allegations were true.