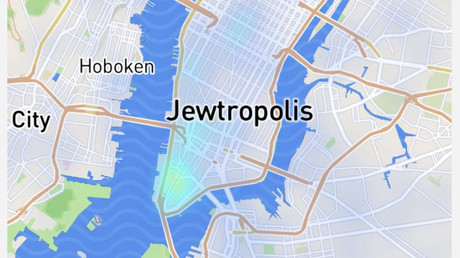 The Snap Map feature, which allows Snapchat users to discover content from a certain location and see the movements of their friends, uses mapping software from a third-party company called Mapbox. Jumpbike, StreetEasy and Zillow also use Mapbox’s maps for their bike sharing and apartment rental apps.

Somebody managed to make the change by tampering with Mapbox’s software, and the digital vandalism was spotted by Twitter users on Thursday morning.

Whatever mapping service that Snapchat, CitiBike, StreetEasy, (perhaps others) use — it seems — is showing New York City as “Jewtropolis” this morning. pic.twitter.com/nsVe8goLyo

Snapchat said it was working with Mapbox to “get this fixed immediately.” Perplexed users also began tweeting the other apps’ customer support teams.

The Anti-Defamation League instantly responded, asking the affected apps if they had “taken down this anti-Semitic vandalism yet?”

Amid cries of anti-Semitism and racism, some of New York’s Jewish community saw the funnier side. “This is ridiculous,” quipped Rabbi Mordechai Lightstone. “Everyone knows Jewtropolis is in Brooklyn, not Manhattan. Never trust crowdsourcing!”

If NYC is Jewtropolis there’s definitely a Goytham City somewhere in the South.

People are just jealous because Jewtropolis is bright and vibrant and Goytham City is dark and seedy. Plus everyone knows Jewperman can beat Batmantisemite.

Us Jews seeing this: wow this is bad and a bit scary but also seriously you had JEW YORK right there and went with mediocre word play Jewtropolis instead? https://t.co/WcCkCG30Qx

Several hours later, Mapbox fixed the problem, which they said was a “disgusting” act of “human vandalism.”