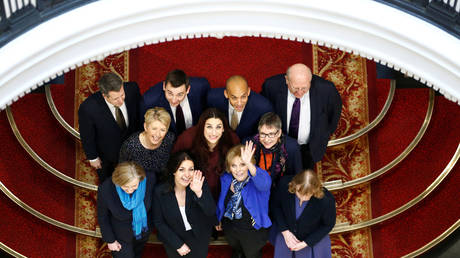 The resignations of three Tory MPs, who have declared allegiance to the new ‘Independent Group’ created by Labour rebels, has prompted accusations that it’s merely a single issue neoliberal club with one message – stop Brexit.

Heidi Allen, Sarah Wollaston, and Anna Soubry quit the Tories on Wednesday in protest at what they see as the party’s lurch to the right, blaming Jacob Rees-Mogg’s hardline Brexiteer faction, the ERG, for forcing Theresa May’s hand on Brexit. The move to resign and cosy up to ex-Labour MPs in their new independent grouping has caused fierce reaction on social media.


Ash Sarkar, senior editor at Novara Media, took to Twitter to ridicule the MPs, claiming this new faction was nothing more than an expression to keep the status quo. She rejected any notion it could see in a new era of progressive politics.

The grassroots Corbynite organisation, Momentum, insisted British politics was witnessing a “Blairite-Tory coalition” with the aim of bringing back from the dead an “agenda of privatisation, deregulation and tax cuts for the super rich.” Guardian journalist Owen Jones argued that a vote for these independent MPs was a vote for policies which have “wrecked Britain.”

It’s officially just a holding pen for people who all hate Brexit, but also really like the disastrous economic policies which made it happen in the first place. https://t.co/p3ySpKfow9

So Allen, Soubry and Wollaston have quit the Tories and joined the splinter group.

Now we know for sure. The splinter group is a Blairite-Tory coalition aimed at resurrecting a dead agenda of privatisation, deregulation and tax cuts for the super rich.

Nobody voted for this.

After defecting, Anna Soubry declared “the coalition government did a marvellous job” and that austerity “was absolutely necessary and I don’t have a problem with that.”

“The Independent Group has now become a Tory-Establishment Coalition.

“What unites the 11 MPs is their business as usual support for austerity, corporate tax cuts and big money corrupting politics.”

I know it may seem exciting to some, and some of those involved are my friends, but the political impact of a new party (as that’s what it is) is a long rein of Conservative Government. In trying to stop that, that makes them our political opponents now. https://t.co/Zcuv4EI5jp

However, not everyone has been so negative about former Tory and Labour MPs joining forces. Former England International footballer, Gary Lineker claimed that for the politically-homeless, these parliamentarians could offer “a place of shelter from the increasingly extremist political duopoly.”

No idea where this will lead, but for many that are politically homeless this could conceivably be a place of shelter from the increasingly extremist political duopoly. https://t.co/Um5KE6kKMA

The divisive issue of Brexit has caused political turmoil for British lawmakers, wrestling with their loyalties to their parties and personal views on the rights and wrongs of the UK leaving the EU.

Eleven MPs have now quit their respective parties to become members the Independent Group, headed by prominent ‘People’s Vote’ advocate Chuka Umunna. The Streatham MP revealed on Monday that he hoped to transfer his fledgling group into a fully-formed party by the end of the year, in a bid to shake up British politics.